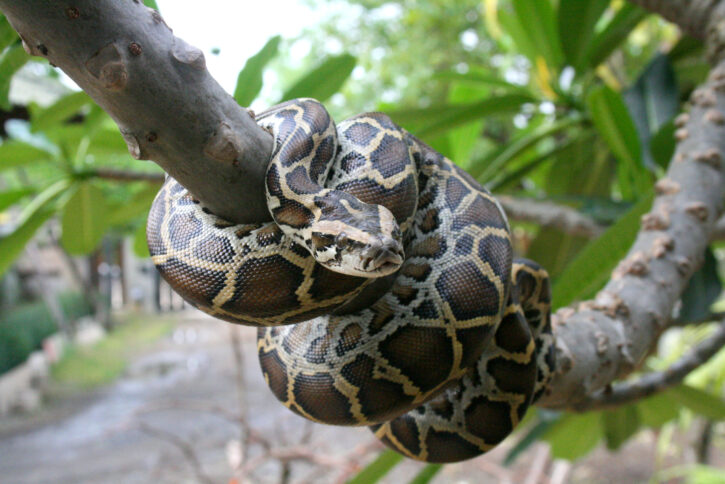 The Burmese python is typically 5 m (16 ft.) long and weighs up to 90 kg (200 lbs.). It is one of the largest snakes in the world. Burmese pythons are native to Southeast Asia, but they also live in Florida, USA, where they are an invasive species. They live near water, like marshes and swamps.

When they are small, Burmese pythons split their time evenly between trees and the ground, but when they get too big, they spend most of their time on the ground or in the water.

Burmese pythons have smooth looking scales. They have a light brown base color with irregular reddish-brown blotches across their backs and sides. The light brown base fades to a pale tan on their stomach side. The blotch on their head is arrow shaped.
Their coloring and patterns create a camouflage that helps them hunt.

Burmese pythons hunt mostly birds and mammals. In their non-native habitat of Florida, they have also been known to eat alligators. Burmese pythons are carnivores, a trait shared by all snakes. To catch their prey, they grab the animal in their jaws. They have fangs that curve toward their body. After they bite their prey, Burmese pythons wrap their body around the animal and squeeze. This is called constriction, and it kills their meal.

When Burmese pythons eat, their bodies change. Their stomachs expand and produce more acid. They will eat whenever the opportunity presents itself, even if they have just eaten.

It’s unlikely to find multiple Burmese pythons together. They prefer to live and hunt alone. The only time they pair up is during mating season in early spring. The female will lay between one and three dozen eggs. She will curl around the eggs to keep them warm until the babies crack their way out using a tooth. After hatching, the babies are on their own to survive.

According to the IUCN Redlist, Burmese pythons are listed as vulnerable, but critically endangered in some of their native regions. Their overall population is decreasing for several reasons. They are hunted for their skins, for use in medicine, as food, and for pets. They are also at risk of habitat loss.

One place where the Burmese pythons are thriving is the Everglades, a swamp region of Florida, USA. There they are an invasive species, whose population comes from released captive snakes. In Florida they are hunted to help protect the natural plants and animals of the area.

What You Can Do to Help Burmese Pythons