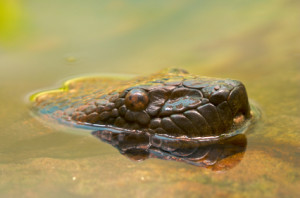 The green anaconda is native to South America, making its home in swamps, marshes and streams. Their enormous size makes it much easier for green anacondas to swim in the water than to slither slowly on land. Their eyes and nostrils are on the top of their head allowing them to see and breathe while most of their body is under water.

Most of their time is spent in the water hunting. Although they use both sight and smell to hunt, they also have the ability to sense heat emitted by potential prey. Green anacondas prey on a variety of animals including fish, birds, tapirs, wild pigs, capybaras, and caimans (reptiles similar to alligators). They’ve even been known to eat jaguars.

Anacondas are not venomous; they use constriction instead to subdue their prey. Once an anaconda sights its target, it will grab the animal in its jaws, locking it in with its teeth. Once firmly grasped, the anaconda will coil around the prey and squeeze it until it dies of crushing or suffocation. It will then consume the carcass whole. For larger prey, the green anaconda can unhinge its jaw to stretch its mouth around the body. After a big meal, anacondas can go weeks without eating again.

Green anacondas have also been known to partake in cannibalism. Females, the larger of the sexes, have been reported to eat smaller male anacondas.

Green anacondas spend most of their time alone. However, between April and May, males seek out females for the opportunity to mate. Often times, multiple males will pursue the same female. This results in “breeding balls” of up to a dozen males wrapped around a single female, all attempting to mate. The breeding ball can last up to 4 weeks.

Once pregnant, the female will produce eggs inside her body. The eggs develop for 8-12 weeks and then hatch while still inside the mother’s body. She then gives birth to as many as 80 tiny snakes, each 30-60 cm (12-24 in.) in length.

Green anacondas can live over 10 years in the wild. They can live up to 30 in captivity.

Anacondas are sometimes hunted illegally for their skin or to be sold as pets, but this is rare. Their size makes them inconvenient pets, and their skin is not very popular for clothing and shoes. They are also very difficult to catch.

Another threat they face is habitat destruction. Despite this they are not considered endangered. 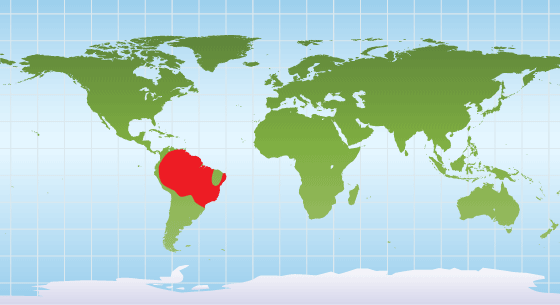 The green anaconda is native to South America, making its home in swamps, marshes and streams.

Blog Posts about the Green Anaconda