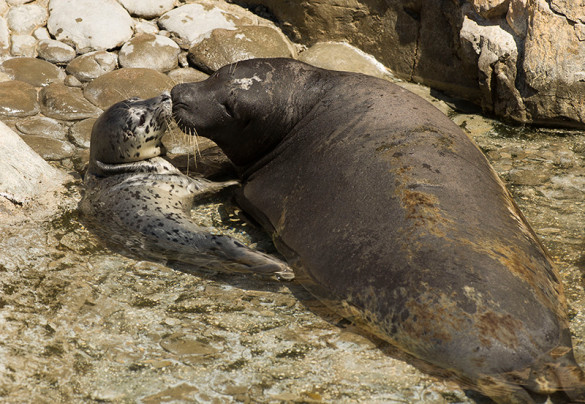 Dagwood the harbor seal with her new baby. Photo by SeaWorld® Orlando.

On March 30, SeaWorld Orlando welcomed a harbor seal pup. The pup was born to 41-year-old mother, Dagwood. Both are doing well and are being cared for by SeaWorld’s animal care team. 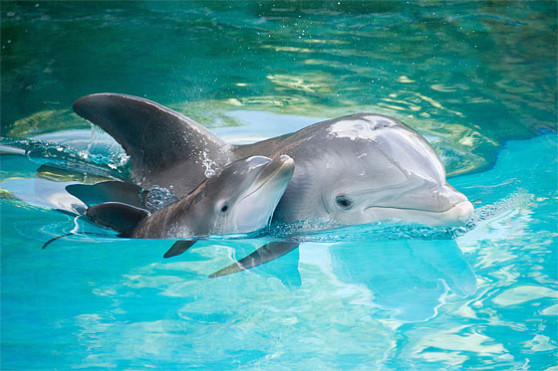 A female Atlantic bottlenose dolphin calf bonds with her mother at Discovery Cove in Florida.

According to SeaWorld, the new baby is doing well, continuing to develop and bonding with her mother. 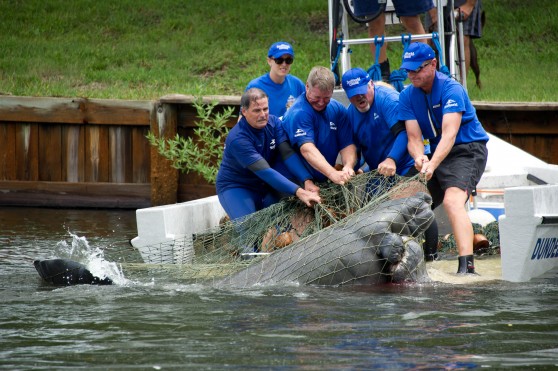 SeaWorld’s Animal Rescue team traveled to Sykes Creek in Merritt Island, Fla., on June 8 to rescue the 10-foot manatee that had severe injuries to the front right flipper caused by a crab pot line.

Back in June, the animal rescue team at SeaWorld Orlando came to the aid of a 10-foot manatee who was injured and caught in a fishing line in Sykes Creek in Merritt Island, Florida. The 1,380-pound manatee was transported to SeaWorld so that veterinarians could treat her injuries.  Her right flipper was severely injured and had to be amputated.

On July 18, the manatee gave birth to a healthy calf.  The baby has been nursing and bonding with its mother in SeaWorld Orlando’s back area pool. The animal team will continue to monitor the pair. 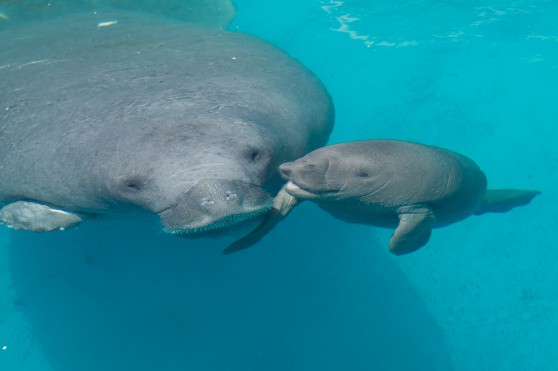 Approximately six weeks after her rescue, rescued manatee gives birth to a calf at SeaWorld Orlando on the morning of July 18, 2012. 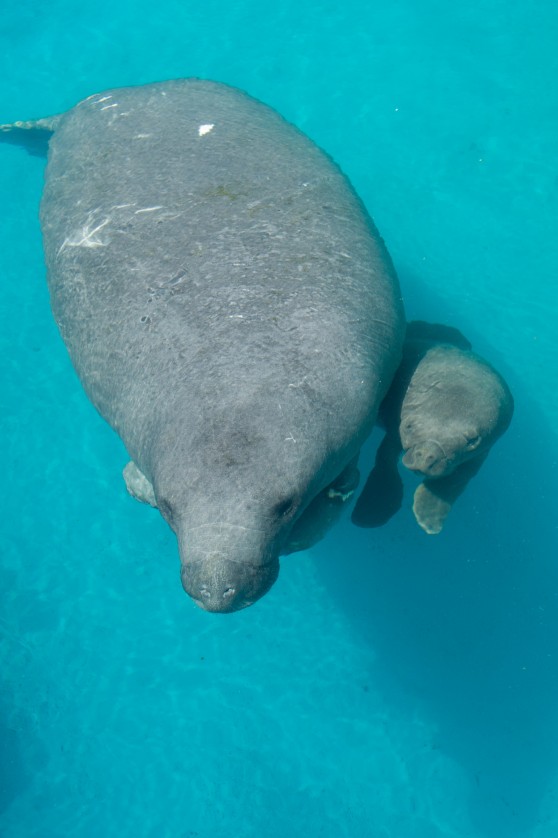 The mother and baby will be monitored by SeaWorld’s animal team while they bond in the back area pool. 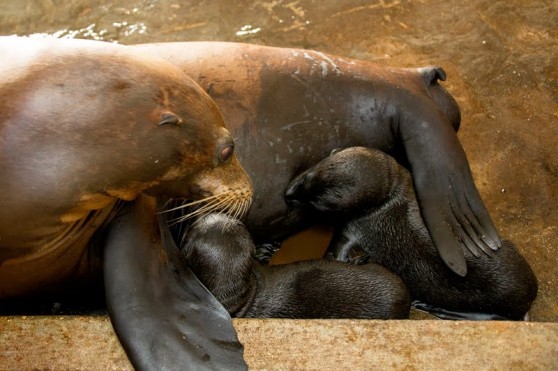 On June 17, 2012, twin sea lions were born at SeaWorld Orlando. The pups, and mom, Fable, are doing well. This is the first time twin sea lions have been born at the park.

Last week, SeaWorld Orlando welcomed two bundles of joy: twin baby sea lions! The pair were born to mother Fable, who is nearly 14 years old. Sea lions usually give birth to only one pup at a time, so this is a very rare occurrence in the animal world.

The pups will nurse from their mother until they are between 6-12 months old. 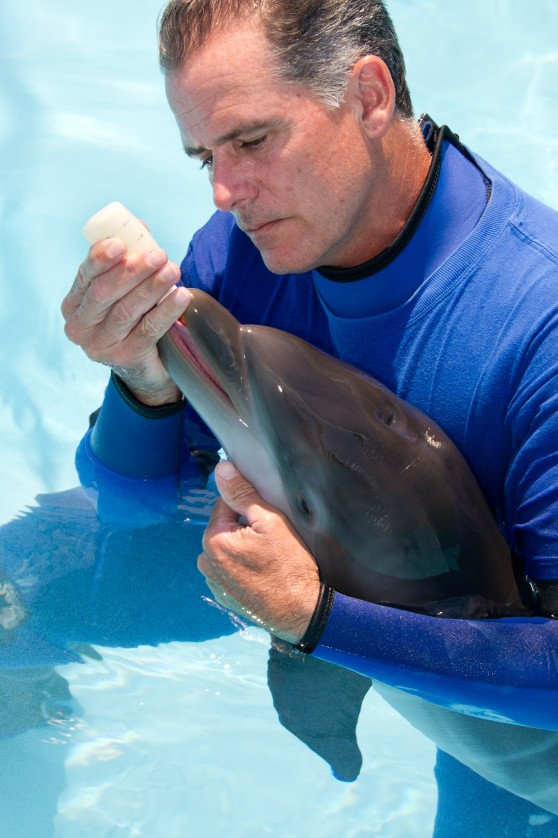 Preliminary tests have showed no major health issues in the newborn dolphin rescued on May 20, but to ensure the young animal gets the essential nutrients he needs, SeaWorld’s animal team has been manually tube-feeding the dolphin every two hours.

A newborn bottlenose dolphin was discovered stranded in shallow waters off of Three Sisters Island in Florida on Sunday.  SeaWorld’s animal rescue team, in conjunction with Hubbs-SeaWorld Research Institute, transported the baby to SeaWorld’s facility in Orlando for medical testing and care.

Due to its size (just under 35 pounds), its upright dorsal fin, and its still-attached umbilical cord, SeaWorld‘s animal care experts believe the male dolphin to be no more than five days old.  Usually baby dolphins nurse from their mothers until they are 12-18 months old.  Animal care experts have been tube-feeding the youngster every two hours.

In honor of Father’s Day, here’s a fun video of Simon, an otter at SeaWorld who is very attentive to his young. He helps them swim, he encourages them, and he cuddles with them!

Watch the video below! 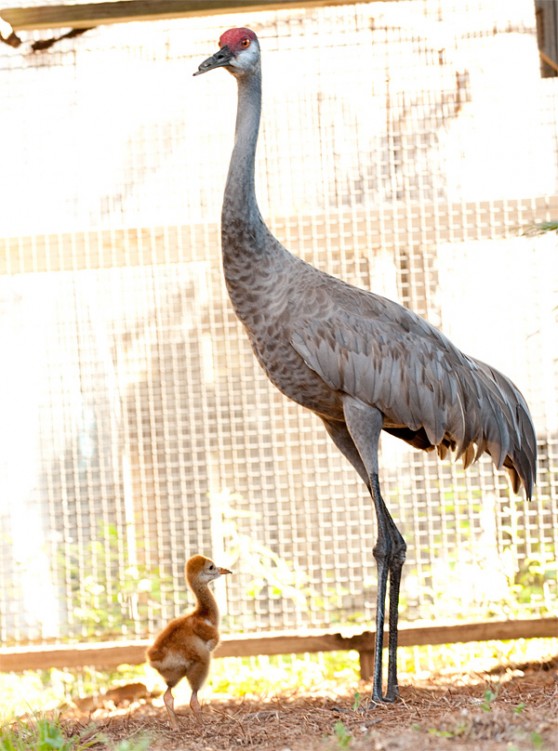 A few weeks ago, the aviculture team at SeaWorld Orlando took into their care an adult sandhill crane with a rubber gasket stuck around his bill. The gasket not only made it impossible for the crane to eat, it impeded upon the proper development of his bill. The SeaWorld team removed the gasket and provided around-the-clock care to rehabilitate the bird.

While caring for the adult, SeaWorld rescued a newly-hatched, orphaned sandhill crane chick. Although older cranes sometimes do not tolerate unfamiliar chicks, the team decided to see if their rescued adult might act as a surrogate for the chick. And to everyone’s delight, the pair bonded!

By taking the orphan under wing, the adult crane has given the chick the opportunity to mimic and learn behaviors needed to survive in the wild. Eric Reece, SeaWorld’s Supervisor of Aviculture, adds, “The fact that the adult crane took to the chick bodes well for the development of the chick. It is now growing and doing well.”

Once the adult crane has recovered from his injuries and the chick learns to fly, both birds will be released into the wild together.

END_OF_DOCUMENT_TOKEN_TO_BE_REPLACED

SeaWorld rehabilitation experts have been working around the clock tending to a baby manatee orphan.  Every three hours, the 3.5-foot, 41-pound marine mammal is bottle-fed with a nutrient-rich formula. Every other day, the animal care specialists weigh the manatee and monitor her progress. Although her condition remains guarded, park veterinarians hope to eventually release her back into the wild.

The manatee, just weeks old, was rescued from the waters of Daytona Beach, Florida and transported to SeaWorld by the Florida Wildlife Conservation Commission.

In the wild, all three species of manatee are considered threatened by the IUCN Redlist. The Florida manatee subspecies is considered endangered.  Threats include habitat destruction, red tide, and boating accidents. 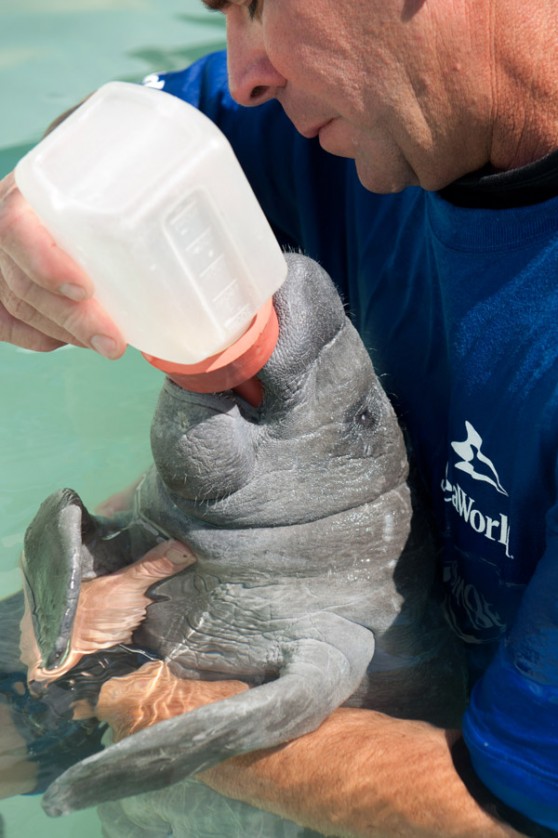 SeaWorld animal care specialist Jeff Braso bottle-feeds a baby manatee, Tuesday, July 27, at SeaWorld’s Rescue & Rehabilitation Center in Orlando, Fla. The park’s animal staff has been providing 24-hour care for the animal since she was orphaned by her mother in Daytona Beach, Fla. on July 24, 2010. (Photo by SeaWorld Orlando) 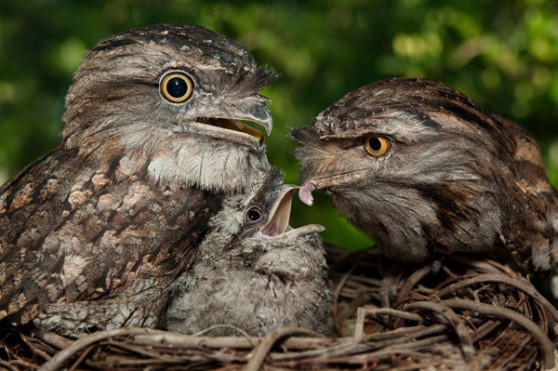 A tawny frogmouth chick, hatched April 11, 2010 at SeaWorld Orlando, reaches for a bite to eat.

This tawny frogmouth chick, shown being fed by its mother,  is the 24th chick bred by SeaWorld aviculturists over the past 10 years.  In the past,  tawny frogmouth breeding programs were largely unsuccessful, and populations in North American zoos dwindled.  But SeaWorld worked with the Association of Zoos and Aquariums (AZA) to improve captive breeding methods, and the program has helped strengthen population numbers.  The little guy pictured above is the first chick in the program to be raised by its parents, instead of hand-reared by aviculturists.

Tawny frogmouths inhabit the savannas and open woodlands of Australia. When threatened, they rely on camouflage for protection.