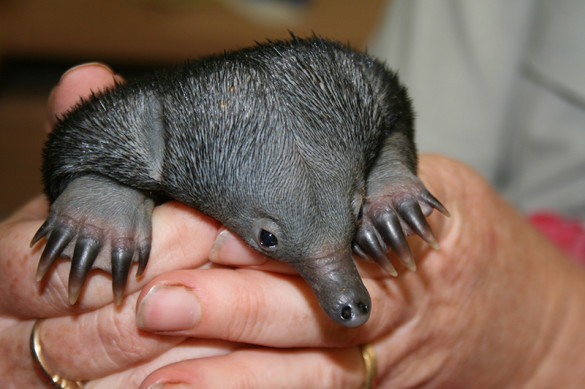 The team of vet nurses at Taronga Western Plains Zoo has been caring for this baby echidna for the past couple months. Photo by Taronga Conservation Society Australia.

The Taronga Western Plains Zoo in New South Wales, Australia has been hand rearing a baby echidna (called a puggle) over the last couple of months.

The little puggle was found at the side of the road. It is believed the mother was hit by a car.

“It’s feeding well and gaining weight steadily, so we’ll be able to wean it in about three to four months’ time and start introducing it to solid food.”

Normally, echidnas live in their mothers’ pouches for 2-3 months and then move into a secluded burrow for up to a year. So it is very rare to see an echidna puggle.

“It will be some time before the puggle will be able to fend for itself, but until then it’s in safe hands,” said Jodie.

Learn more about echidnas at our short-beaked echidna facts page.