The Pukaha Mount Bruce National Wildlife Centre in New Zealand welcomed a rare baby bird on Sunday.  The white kiwi chick, named Mauriora – meaning “sustained life” in Maori –  is the second of its kind to be born in captivity.  The first white kiwi born in captivity hatched in May and is name Manukura.

The two white kiwis are North Island brown kiwi who carry a rare white gene. They are not albinos. 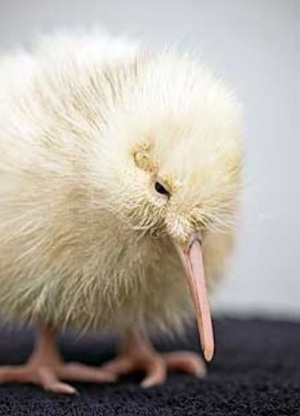 May 1st saw the hatching of a rare all-white kiwi at the Pukaha Mount Bruce national wildlife center in New Zealand. The bird is not an albino, but does have white feathers. He was given the Manukura by members of the local Maori tribe.

Manukura is thought to be the first all-white kiwi born in captivity.

Kiwi are native to New Zealand and have had their population numbers drop, mainly due to the European stoat, an introduced species. All five species of kiwi are endangered.

A recently hatched rare reptile, the tuatara, has been discovered in New Zealand for the first time in 200 years. The species’ lineage dates back to the dinosaur age.  The tuatara was found in the wild in the Karori Wildlife Sanctuary in Wellington.

While numbering in the tens of thousands on the islands surrounding New Zealand, the tuatara was nearly extinct on the main island. Their near extinction was brought about by the introduction of predators, including rats.

The hatching of the tuatara is a sign that reintroduction and conservation efforts are working.

An octopus named Sid spent 5 days on the lam after escaping from his tank in a New Zealand aquarium. Sid managed to elude detection for those days by hiding in a drain that pumped fresh sea water into the aquarium.  He was caught after being spotted making a dash for an open door. Though hungry, Sid was unhurt. The aquarium staff decided that it was best to release Sid, who is an older octopus, back into the wild.