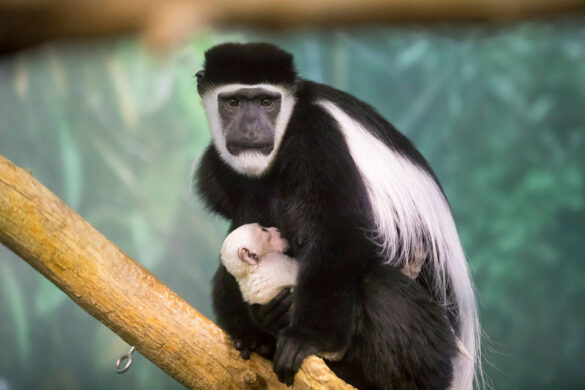 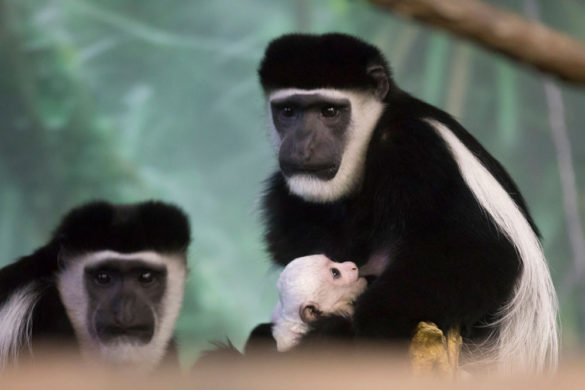 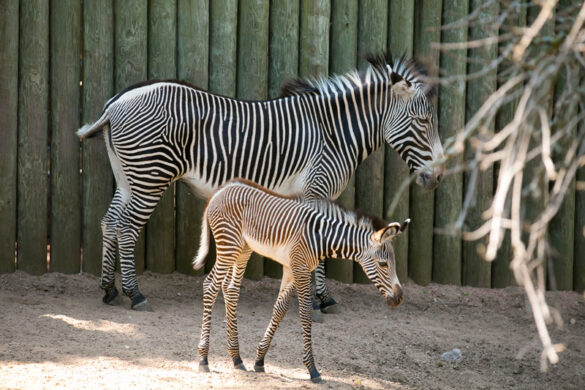 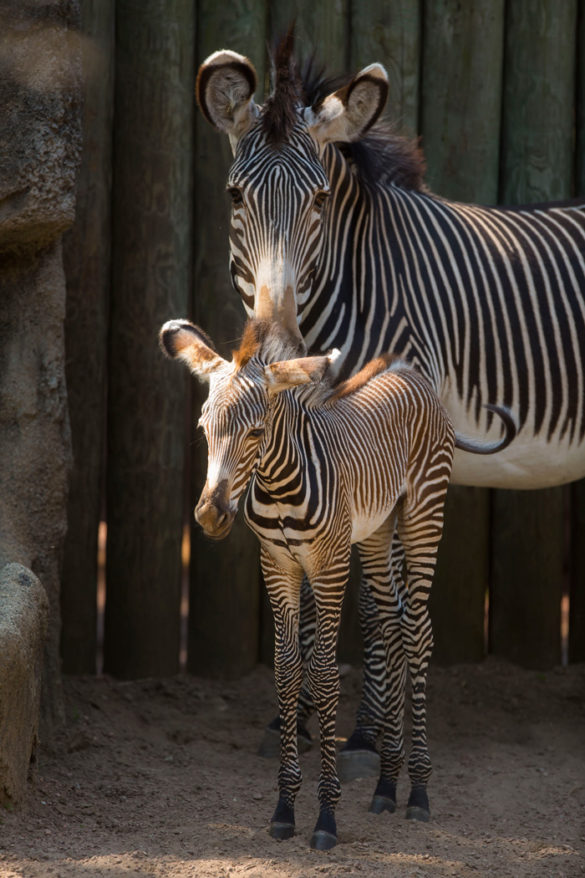 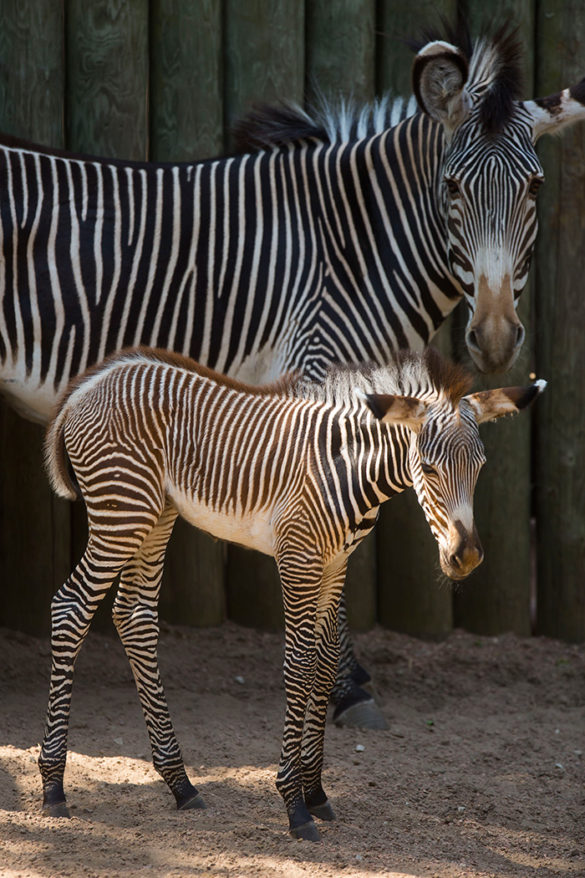 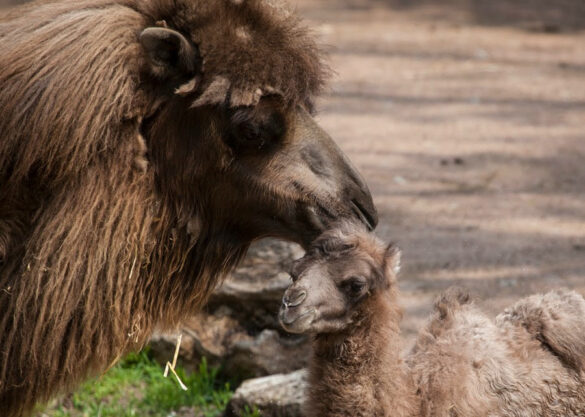 On May 9, a male baby Bactrian camel was born at Lincoln Park Zoo in Chicago. It is the first camel calf born at the zoo since 1998!

Weighing 81 pounds at birth and standing at 4 feet tall, the calf joins his mother Nassan, his father Scooter, and two adult female camels at the zoo’s Antelope Zebra Area.

“We’re ecstatic to welcome a Bactrian camel calf to the zoo,” said Curator Diane Mulkerin. “He is still a bit wobbly on his feet but remains quite strong and is ready to begin meeting the rest of the herd.”

When the calf matures to an adult size, he could weigh as much as 1,500 pounds and stand as tall as 7 feet.

Bactrian camels have two humps (as opposed to dromedary camels, which have only one hump on their back). The humps are filled with fat, which provides energy to the camel when food is scarce. The camels also have thick brown fur to keep them warm in the winter. During the summer months, they shed fur to make their coat thinner. 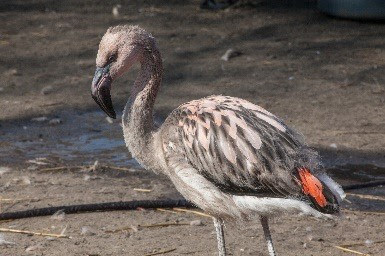 Now on view at the zoo’s Waterfowl Lagoon, the grey and fuzzy chicks weigh around 2-3 kg, roughly 30 times their weight since hatch.

“These chicks are a true testament to the dedicated animal care staff here at Lincoln Park Zoo,” said Hope B. McCormick Curator of Birds. “We’re excited to share the chicks with our visitors and to learn from these chicks to further our knowledge of the species.”

When the flamingos hatched, animal care staff collected shell fragments for DNA testing. This is a non-invasive way to determine the sex of the birds. The tests revealed that two of the chicks are male and three are female.

In the wild, Chilean flamingos live in large flocks in Peru, Brazil and Argentina. Like all flamingos, the Chilean species has pink plumage – or feathers – but are born with white-grey plumage and show the full iconic coloration at around 2-years-old. Chilean flamingos have the ability to tolerate extreme conditions, which makes them well suited for Chicago’s harsh winters. 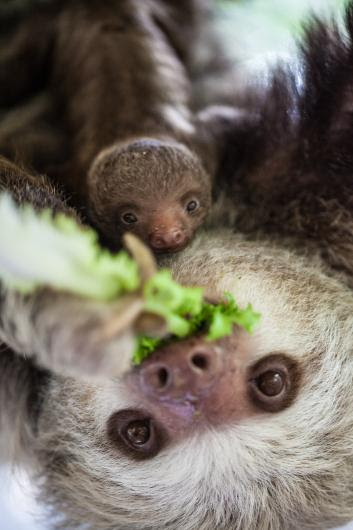 Visitors to the Lincoln Park Zoo in Chicago now have the opportunity to see an adorable baby Hoffman’s two-toed sloth on exhibit. The adorable baby was born on July 25 to 21-year-old mother Hersey and 32-year-old father Carlos.

“The sloth infant appears healthy and is passing critical milestones such as nursing regularly and clinging well to mother,” said Curator Diane Mulkerin. “Hersey is a first-time mother and is being very attentive to her new young.”

Hoffman’s two-toed sloths inhabit the rainforests of Central and South America. Their large hooked claws help them hang upside down from treetops, which is how they spend most of their time. 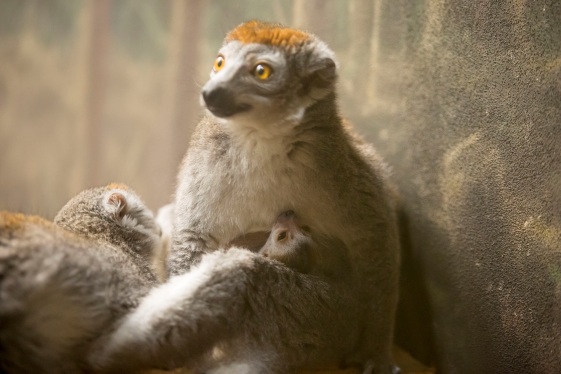 Tucker with her newborn lemur. Photo by Lincoln Park Zoo.

On April 23, a baby crowned lemur was born at Lincoln Park Zoo in Chicago. The newborn is staying snuggled up to mother Tucker and is doing well.

“The infant is healthy and is continuously passing critical milestones such as nursing regularly, gaining weight and holding tight to mother,” said Curator of Primates Maureen Leahy. “Being an experienced mother, Tucker is providing excellent care to the newest arrival.”

In the wild, crowned lemurs inhabit the African island of Madagascar. They are considered endangered by the IUCN due to forest loss. 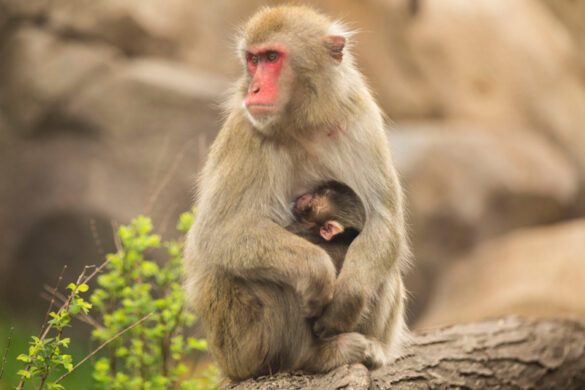 Lincoln Park Zoo in Chicago is excited to announce the birth of a Japanese macaque (pronounced muh-‘kak), also known as a snow monkey, born on May 2.

Zoo staff has determined the little baby is a male. He and his mother Ono are doing well.

According to Curator of Primates Maureen Leahy, “The baby appears healthy, is regularly nursing and visually exploring the exhibit while clinging tightly on Ono’s torso.”

“From a research perspective, this is a significant addition to the population,” said Research Scientist Katie Cronin, PhD. “The new baby will be the first in this population to grow up with access to touch screen computers – a tool that the monkey can decide whether or not to use – so that we can study cognitive abilities and gain a better understanding of how they think and feel.”

In the wild, Japanese macaques inhabit extreme climates throughout most of Japan, from sub-tropical lowlands to sub-alpine regions. Learn more at snowmonkeys.org.

February 24th saw the birth of an endangered female lowland gorilla at the Lincoln Park Zoo in Chicago, IL. The little baby ape has been named Bella and is doing well with her mother, Bahati, and father, Kwan. 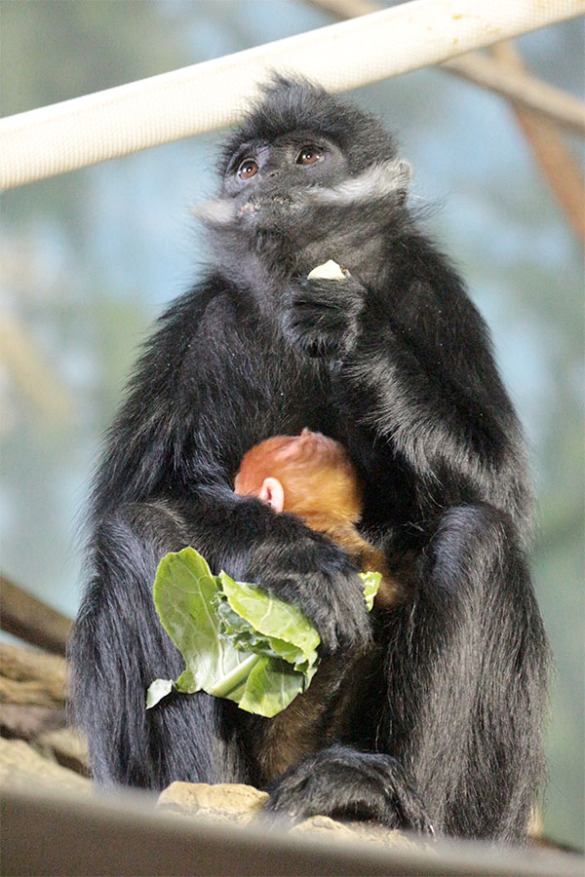 Just in time for Halloween, a Francois langur named Pumpkin gave birth to a bright orange baby. This is the fifth baby for mother Pumpkin and father Cartman.

“The newest Francois’ langur is healthy, nursing regularly and is showing signs of growth,” said Curator of Primates, Maureen Leahy. “Older sister Orla has already shown her support by alloparenting, a process in which the other female monkeys take turns carrying and providing care to the young.”

Although adult Francois langurs are distinguished by their black and white coloring, baby Francois langurs have an orange coat. Scientists believe this encourages alloparenting because the infants are easily identified. The orange fur fades to black after 3-6 months.

Learn more about the Francois langur baby at the Lincoln Park Zoo website.