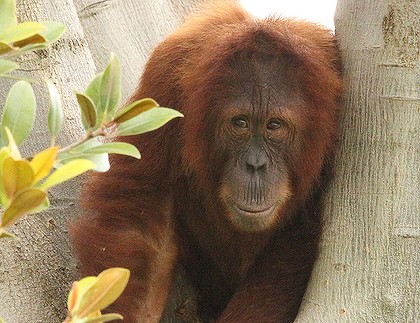 Semeru, a zoo-born Sumatran orangutan, will be released into a national park in Indonesia to help save the species from extinction.

Semeru, a six-year-old male Sumatran orangutan who was born and raised in the Perth Zoo in Australia, will be released into Bukit Tigapulah National Park in Sumatra, Indonesia.

Sumatran orangutans are critically endangered in the wild, and Semeru’s introduction into the park would increase the genetic diversity of the orangutan population there.

To ensure Semeru will be able to survive in the wild after living his whole life only in captivity, zoo keepers and veterinarians spent a year preparing him for the transition.

According to Environment Minister Bill Marmion, “Semeru will be closely monitored and supported on a daily basis with two dedicated trackers for two years and longer if necessary while he adjusts to life in the forest.

“Semeru’s pre-release preparation has included the introduction of Indonesian fruits, enrichment items to sharpen his foraging skills and access to a large fig tree to increase his fitness and hone his climbing and nest-making skills.

“Semeru has also been fitted with a radio transmitter implant which will help trackers monitor him in the dense terrain of Bukit Tigpauluh.”

Read more about Semeru at the Sydney Morning Herald website.

From the press release:

Ujung Kulon holds the only viable population of the critically endangered species; no more than 48 Javan rhinos remain on the planet, and at least 44 of those are found in Ujung Kulon.  Fewer than four animals of unknown sex and age may remain in an isolated population in Cat Tien National Park in Vietnam, where the carcass of a poached Javan rhino was found last month.

“Javan rhinos persist in Ujung Kulon because they are carefully monitored and guarded by Rhino Protection Units, elite anti-poaching teams that patrol the park every day.  While the loss of this rhino was tragic, it appears to have died from natural causes rather than poaching,” said Dr. Susie Ellis, executive director of the International Rhino Foundation.

Ellis went on to say, “Rhino experts agree that expanding the usable habitat in Ujung Kulon is an important first step. The next priority will be to establish a second viable population of Javan rhino at a suitable site elsewhere in Indonesia as an ‘insurance’ population. This will be essential if we are to safeguard it from natural and human-caused disasters and to ultimately prevent its extinction.”

If you would like to help Javan rhinoceroses, visit www.rhinos-irf.org. 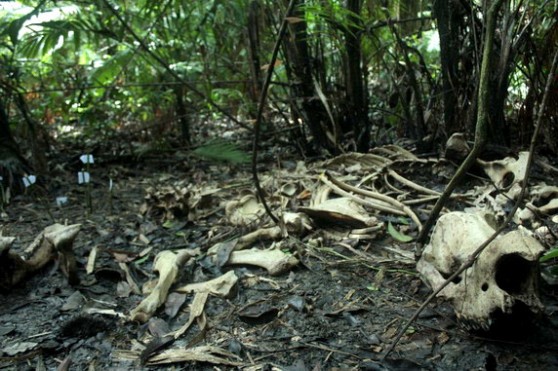 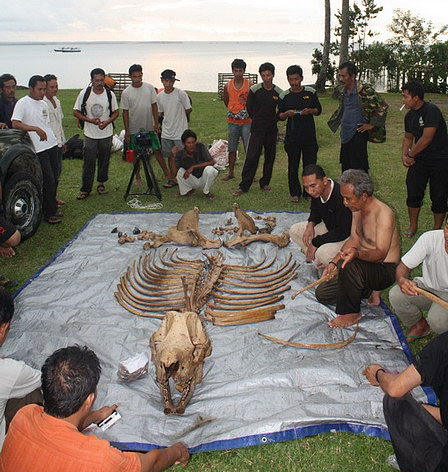 The skeleton of the rhino laid out, with the horn still intact. 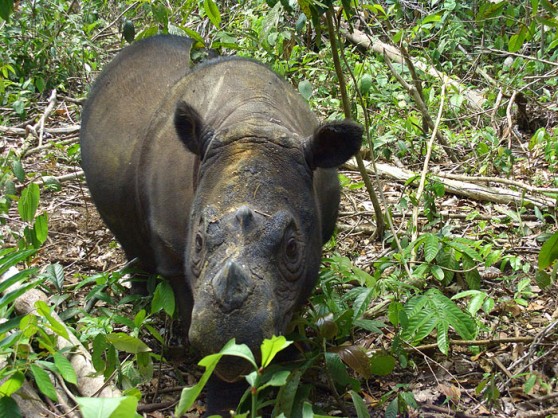 A few weeks ago we reported on the pregnancy of Ratu, an endangered Sumatran rhino. We are saddened to learn today that her pregnancy was lost. Ratu had mated with Andalas, a captive-born Sumatran rhino, three years after Andalas moved to the Sumatran Rhino Sanctuary in Indonesia from the United States.

Dr. Susie Ellis, executive director of the International Rhino Foundation said in a press release, “This is not unusual for a rhino’s first pregnancy.” She added that they are hopeful in this pairing because the two rhinos did produce a pregnancy.

Sumatran rhinos are extremely endangered. There are currently approximately 200 in the wild and 10 in captivity.

Read our previous post about Ratu and Andalas here. 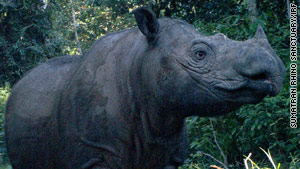 Ratu, a Sumatran  rhinoceros, is pregnant. This is newsworthy because Sumatran rhinos are endangered and births in captivity are incredibly rare. Ratu’s mate, Andalas, was the third Sumatran rhino born in captivity in 112 years. If all goes well, Ratu’s baby will be the fourth.

Sumatran rhinos are the most endangered of all rhinoceros species. Their numbers have decreased due to habitat loss and human poaching.

To read about the Indian rhinoceros, a relative of the Sumatran rhino, visit Animal Fact Guide. 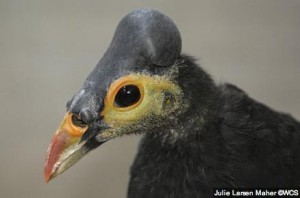 The maleo is an endangered bird found only on the island of Sulawesi, in Indonesia. The maleo is about the size of a chicken, but it lays eggs up to five times as large as chicken eggs. The bird has yellow facial skin, a red-orange beak, a black ‘helmet’, and a black back and pink stomach.

Recently, the conservation of this strange bird has been helped by the purchase and protection of a stretch of beach used for breeding. The maleo buries its eggs in the warm sand of the beach to incubate. The eggs are then abandoned. Upon hatching, the chicks are able to fly and live on their own.

The stretch of beach was purchased for approximately $12,500. Funds were donated by the Lis Hudson Memorial Fund and the company Quvat Management. The 36 acre beach is now owned by Pelestari Alam Liar dan Satwa, known as PALS, a local conservation group.