As we discussed in our gray wolf facts article, gray wolves are keystone predators. They help maintain a healthy ecosystem by preying upon weak animals, thereby strengthening the herd as a whole.

In this video, George Monbiot reveals how the reintroduction of wolves into Yellowstone National Park after a 70-year absence not only changed the ecosystem of the park, it also altered the physical landscape.

Did you know you don’t have to be human to be an environmentalist?  Specially-trained dogs from the group Conservation Canines have been assisting scientists protect endangered species since 1997.

With their highly sophisticated sense of smell paired with their insatiable urge to play (their reward at the end of the day), dogs can track scat, or animal droppings, from miles away.  Once located, the scientists can analyze the scat for genetic, physiological, and dietary information.  This provides clues to the animal’s behavior and environment which helps conservationists determine the best way to protect it.

The dogs, which are adopted from animal shelters and then trained by the crew at Conservation Canines, track scat from a variety of endangered animals. The list includes tigers, orcas, fishers, spotted owls, bears, wolves, caribou, giant armadillos, giant anteaters, pumas, jaguars, and Pacific pocket mice.

Watch a video below about Tucker, a black labrador mix who specializes in tracking orca scat. This is a tricky task because he must catch the scent over open water, the scat can move around and/or sink in the water, and he must provide signals to his human coworkers so they can steer the boat in the correct direction.

There are several very interesting programs airing in the next few days on NatGeo that focus on animals. Be sure to tune in!

My Child is a Monkey
Airing Friday, August 13 at 5pm ET/PT

They wear diapers and ride in strollers but, they’re not babies — they are “monkids.” NGC goes inside the controversy of adopting monkeys as surrogate babies. Many question whether this is animal cruelty or even a danger to the owners. Others are fiercely devoted to these primates they see as part of the family. See just how far these wild monkeys have come from their treetop habitat as we explore this growing phenomenon.

Watch a video clip that outlines some of the issues that come with integrating a wild animal into a human family.

If humans were as varied as dogs we would range in height up to 22 feet tall and in weight more than 1,000 pounds. In the ultimate canine ancestral story, NGC traces the genetic journey from wolf to dog, taking viewers back 100,000 years to meet the “mother of all dogs.” It’s no accident that dogs evolved this way, as humans have been selectively breeding them for around 14,000 years to serve our needs as laborer, companion, hunter, herder and warrior, as well as to suit our aesthetic fancy.

In this video clip, we meet an incredible therapy dog named Tuesday who helps an Iraq veteran to overcome his debilitating PTSD.

We journey to the “Big Easy,” famous for streets packed with party fanatics, but they aren’t alone. Mireya’s on a treasure hunt to find as much wildlife as possible and even hopes to confirm a rumor about an unexpected urban invader—a feral hog. We’ll follow as she searches through parks, swamps and city streets to find New Orleans’s wildest animals—including large invasive rodents called nutria that have been devouring the New Orleans ecosystem. She goes on a late-night escapade with a city-hired hog-hunting squad to catch hogs in a central New Orleans park, and eats bayou food including frogs and bugs … local style!

Watch this clip of Mireya tracking down the elusive New Orleans urban hog in a residential neighborhood. 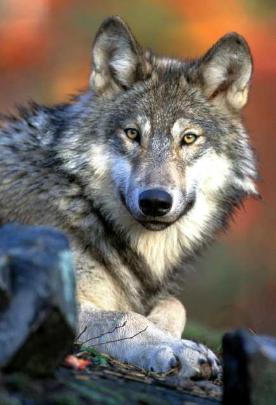 Gray wolf populations in Idaho, Michigan, Minnesota, Montana, Utah and Wisconsin will be removed from the protection of the Endangered Species Act. The move signifies an increase in population of gray wolves in these areas, which comes as a result of conservation efforts. The wolves will still be protected in Wyoming.

The incoming Obama administration will have the opportunity to relist the grey wolf as a protected species.