The Cincinnati Zoo recently unveiled two baby cougars, Joseph and Tecumseh, who were born on September 19.  The two cubs are currently on display at the zoo’s Children’s Zoo Nursery and will soon join the Cat Ambassador program. For more information and photos, see the Cincinnati Zoo’s Facebook album. 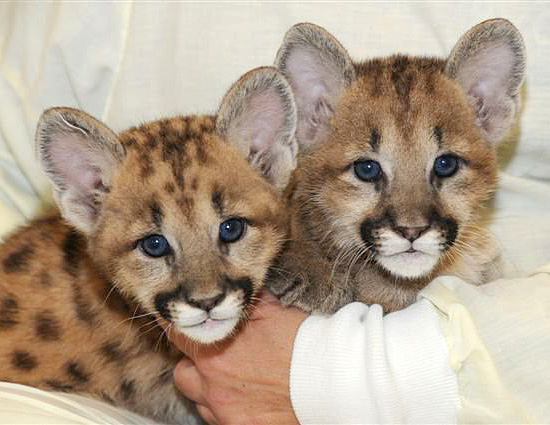 Cougars are also known as pumas, panthers, and mountain lions. In the wild, they inhabit western North America, a small region in Florida, and most of South America. To learn more about cougars, visit Animal Fact Guide’s article: Cougar.

The Florida panther, a small subspecies of the cougar that inhabits southwest Florida, has grown in population from a mere 20 cats in the 1970s to 100 panthers currently.

However, the US Fish and Wildlife Service will only deem their conservation plan successful when three colonies of 240 panthers thrive.  In the current space of 3500 square miles, this may not be possible.  Scientists believe the area has reached maximum capacity for the large felines.

So far, possible plans to establish cougar colonies in Arkansas, Georgia, and northern Florida have not come to fruition. In the meantime, human population and development has increased significantly in southwest Florida in past years, decreasing the possiblity of expanding the panther population there.