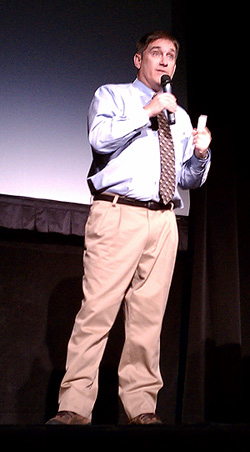 The editors of Animal Fact Guide had the pleasure of attending a talk this evening given by Dr. Brady Barr at the Garde Arts Center in New London, CT.  As a herpetologist with the National Geographic Society, Barr has experienced a multitude of close encounters with reptiles in the wild.

In one entertaining story,  Barr recounted an episode where his team was trying to measure the speed of Komodo dragons using a radar gun.  His role was to run around with strings of goat meat tied around his waist to entice the large reptiles to give chase.  And chase they did!  Barr was chased left and right by the dragons, who took turns wearing him out.  Finally, out of breath, Barr took refuge up high in a tree.  Komodo dragons can be extremely dangerous creatures as their mouths are filled with many strains of bacteria, making their bite very hazardous.

Although Barr works with many reptiles, including salamanders, geckos, turtles, and snakes, his main passion is with crocodilian species: crocodiles, alligators, caimans, and gharials.

On many occasions, Barr has gotten up close and personal with crocodiles, often called upon to relocate “nuisance” animals.  Barr and his team have captured many crocodiles known to attack people and have relocated the animals to wildlife preserves and zoos.  By doing so, Barr saves the creatures from being exterminated by the locals.

Throughout his presentation, Barr stressed the importance of conservation, noting that many reptile species are at high risk of extinction.