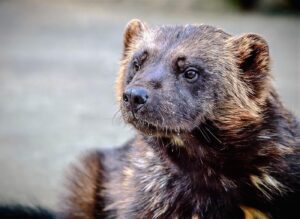 Sharp metal claws. Cool costume. Amazing powers. Wait… wrong wolverine. But Wolverine the comic book character and wolverine the animal do share a few common traits: they are both strong, tough, and tenacious.

Wolverines need to be tough in order to survive in their cold climate home. They live in snowy, wooded forests, scrubland, grassland, and rocky areas in Alaska, Canada, Russia, and Northern Europe.

Though sometimes referred to as “skunk bears” because they look like a cross between a skunk and a bear, wolverines are actually the largest members of the weasel family. They are 65-108 cm (25-42 in.) long and weigh 9-25 kg (20-55 lb.). This is about the size of a medium dog. 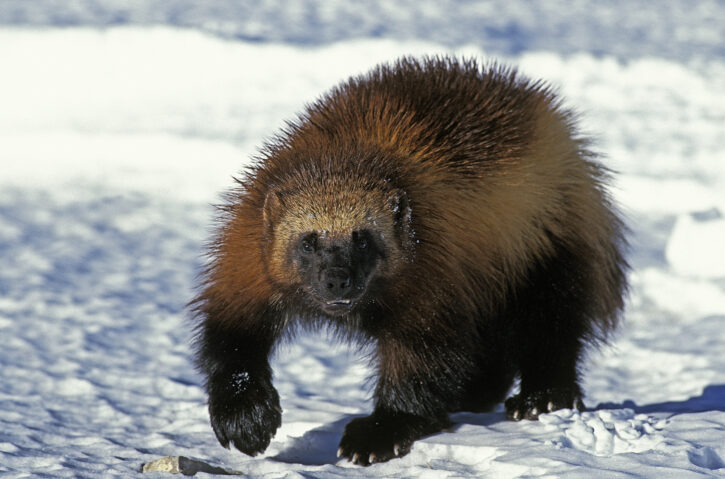 Wolverines have small ears, legs, and necks. Their compact shape helps them conserve heat. They have thick brown, silver, and yellow fur that helps repel water.

Although wolverines are not considered arboreal (tree-dwelling animals), they can climb trees. They are also excellent swimmers.

Wolverines are always on the move. They travel long distances in search of food–as far as 24 km (15 mi.) in one day. They will eat almost anything they can find. Most often they will eat carrion (dead animals). They have strong jaws that allow them to chew through frozen meat and bones. Wolverines have been known to chase away larger animals to protect their own food or to steal the food from the larger predators. 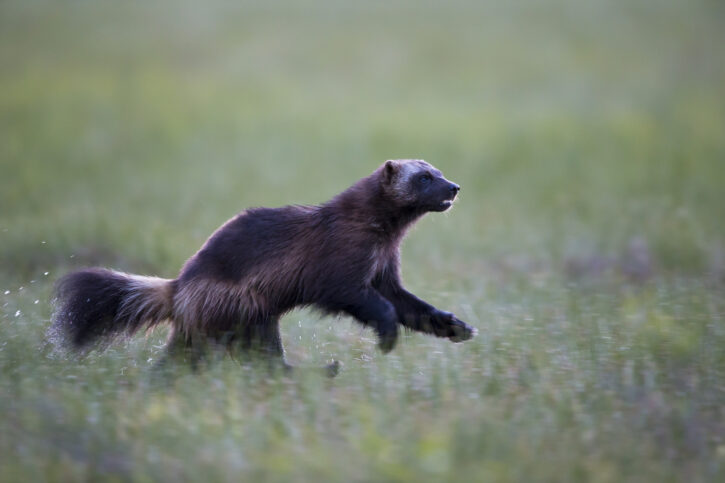 At times wolverines will hunt, mainly animals of equal or smaller size like squirrels and hares, but sometimes larger animals, like sheep and deer. They can chase down their prey with stunning speed or leap from trees to attack unsuspecting prey. They have been observed storing leftover food to eat later. This is often done by nursing mothers. Wolverines will also sometimes eat bird eggs and berries.

The mating period for wolverines is between May and August. They can have multiple partners, and the resulting babies in the litter could all have different fathers.

Once the conditions are ideal, the embryos implant on the uterine wall and begin their development cycle. After 30-50 days, all the babies are born at once, usually between February and March.

Female wolverines make their dens in the snow. They usually give birth to 2-3 babies, called kits, but they could have as many as 4 in a litter. The kits are born with white fur and no teeth. They will stay with their mothers for up to two years.

Though wolverines are normally solitary animals, sometimes wolverine fathers will visit their mates and kits. They may take older kits out to teach them skills they need to live on their own.

Predators of the wolverine are few, but include wolves and bears. Wolverines are also hunted by humans for sport and to protect farming herds. In the wild, wolverines live about 7-12 years. 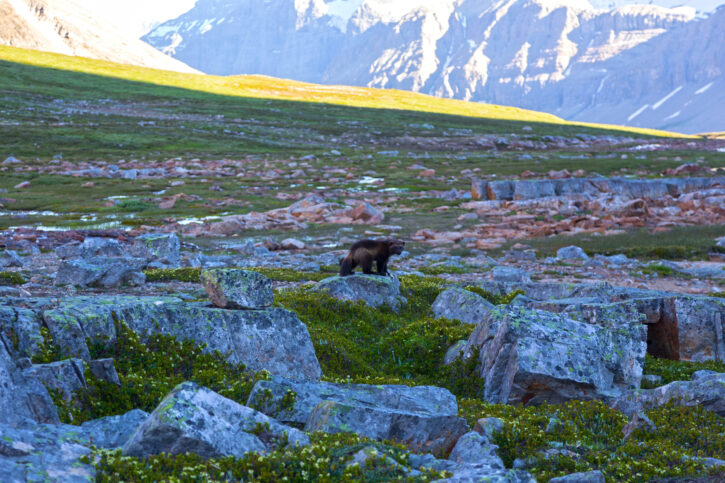 According to the IUCN Red List, wolverines are of the least concern of going extinct, but populations are dropping. Wolverines are vulnerable to reduced habitat from logging, farming, housing, and recreation. They are also at risk due to habitat loss because of climate change.

You can protect wolverines by helping to preserve forests and uninhabited lands. You can also donate to The Wolverine Foundation.