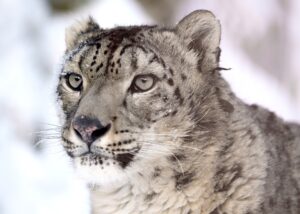 Called the “Ghost of the Mountains”, the snow leopard is a solitary, elusive big cat that lives in the harsh, rugged mountains of central Asia. Their range spans 12 countries, covering about 1.4 million square km (540,000 sq. mi.).

Snow leopards have light gray fur with black spots, known as rosettes. This coloration provides excellent camouflage in their native habitat. It is very difficult to see a snow leopard against a snowy, rocky mountainside. 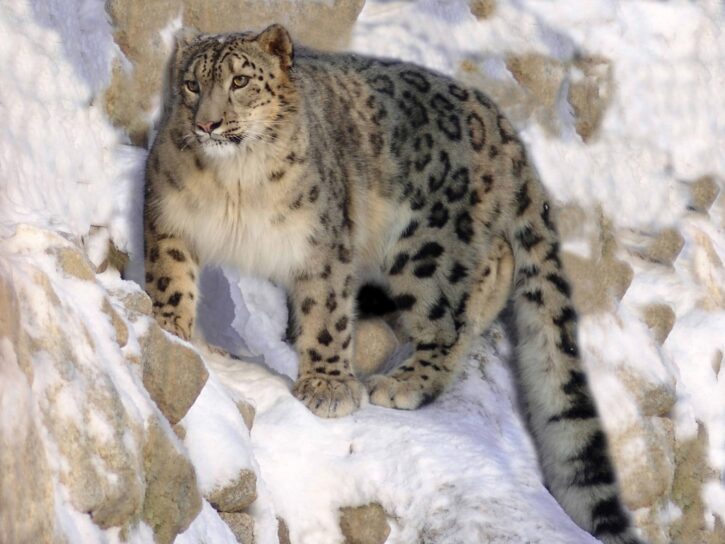 Their large paws act like snowshoes, helping them to walk on top of snow instead of sinking in. They also skillfully grip rocky ledges as they traverse nearly vertical inclines.

Snow leopards have long, furry tails–the longest of all big cats. In fact, at around 100 cm (3.3 ft.) long, their tails are almost as long as their bodies, which measure around 110 cm (3.6 ft.). Snow leopards use their tails as a counterweight, helping them to keep their balance on steep, uneven terrain. They also use their tail like a scarf, wrapping themselves up with it to stay warm.

Equipped with long, powerful hind legs, snow leopards are excellent jumpers. They can travel as far as 15 meters (50 ft.) in one bound, and they can jump as high as 1.8 meters (6 ft.) without a running start.

Snow leopards have short front legs and broad muscular chests which are great for absorbing the impact of long leaps down the mountainside. Their big chests are also very effective at taking in large amounts of air with each breath. This is useful at high altitudes because the oxygen level in the air is very low. 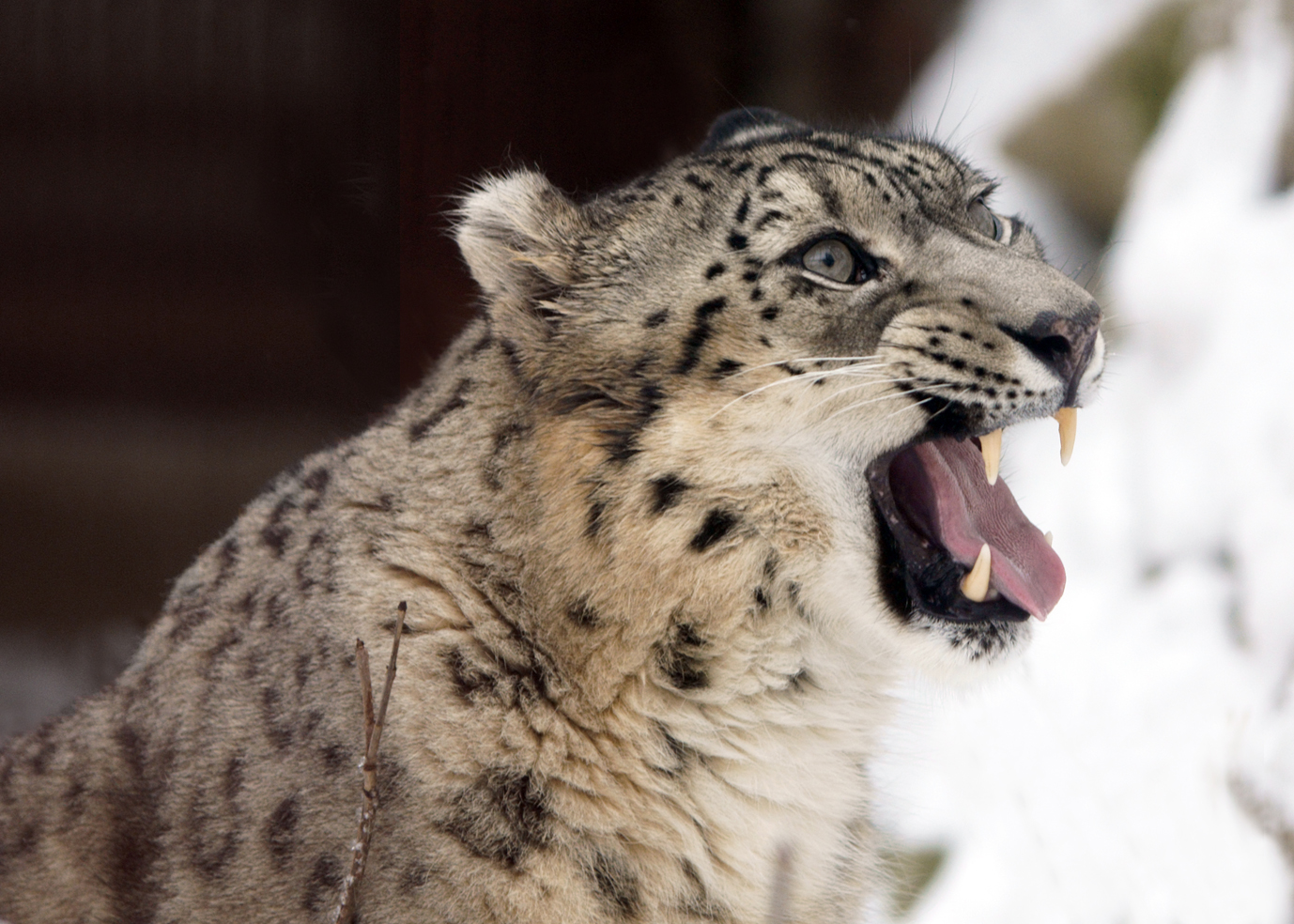 While snow leopards cannot roar, they can growl, meow and puff.

Snow leopards prey upon ibexes (a kind of wild goat), argali (a kind of wild sheep), and blue sheep (which are actually not sheep and are more closely related to goats). They sneak up on their prey on a higher ledge and then chase them down the mountain, traveling at speeds up to 80 kilometers an hour (40 mph). They hunt every 8-10 days, and eat their catch over several days.

Though normally solitary animals, snow leopards do get together in late winter to breed. After 90-100 days, the female snow leopard lines her den with fur and gives birth to a litter of cubs. A typical litter consists of around 2-3 cubs, but there could be as many as 5. She will raise the cubs by herself for 18 months until they are ready to venture out on their own.

Snow leopards live around 10-12 years in the wild. 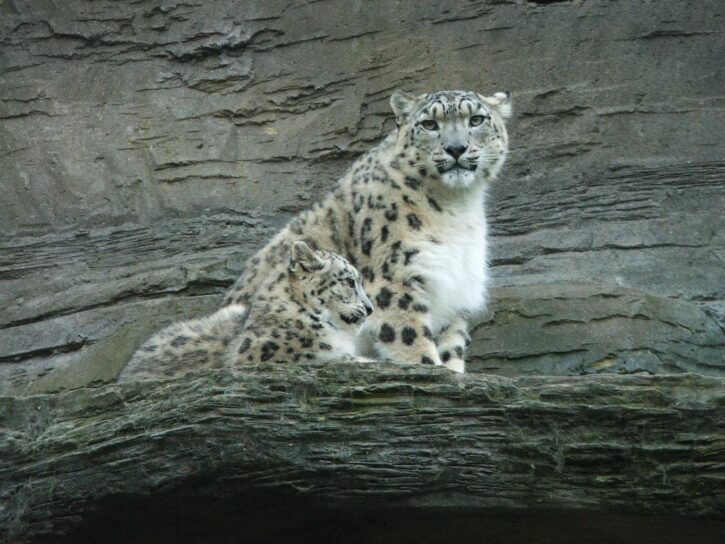 With only 4000-7000 alive in the wild, snow leopards are considered vulnerable of extinction by the IUCN Red List. Their population is currently in decline. Major threats include poaching for the fur trade and traditional medicines, as well as the loss of prey and habitat due to livestock farming, mining, and development. A big issue is that when their natural prey is in short supply, snow leopards will eat livestock. Herders then kill the snow leopard in retaliation.

You can help snow leopards by donating to the Snow Leopard Trust. This organization works with local communities, encouraging and empowering herders to keep both snow leopards and their livestock safe. 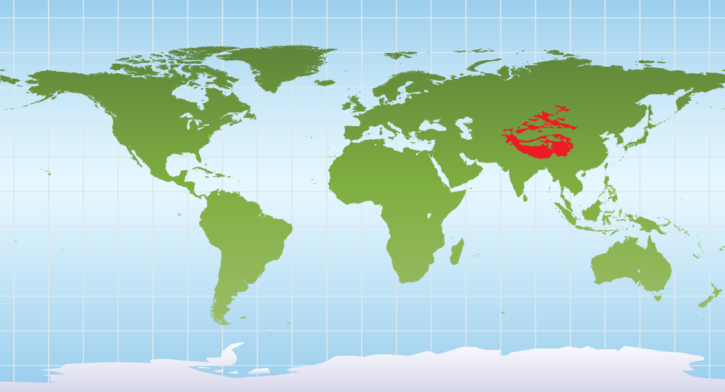 Blog Posts about the Snow Leopard