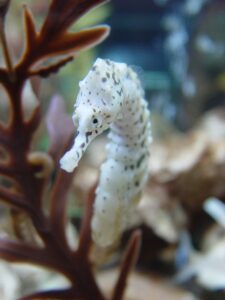 When you think of a fish, a seahorse might not be the first thing that comes to mind. Its head looks like a horse’s head. It swims upright. It is covered in bony plates instead of scales. But a seahorse is a kind of fish, in the same family as pipefish and seadragons.

Seahorses can be found in tropical and temperate coastal waters around the world. To date, scientists have identified 46 different species of seahorses, ranging in size from 13 mm (.5 in.) to 35 cm (1.1 ft.) long.

It can be difficult to classify seahorses using just visual markings and characteristics because individual seahorses within the same species sometimes look very different from one another. This is because seahorses can change their shape and color to blend in with their surroundings. So scientists have used genetic research to help differentiate between the species. 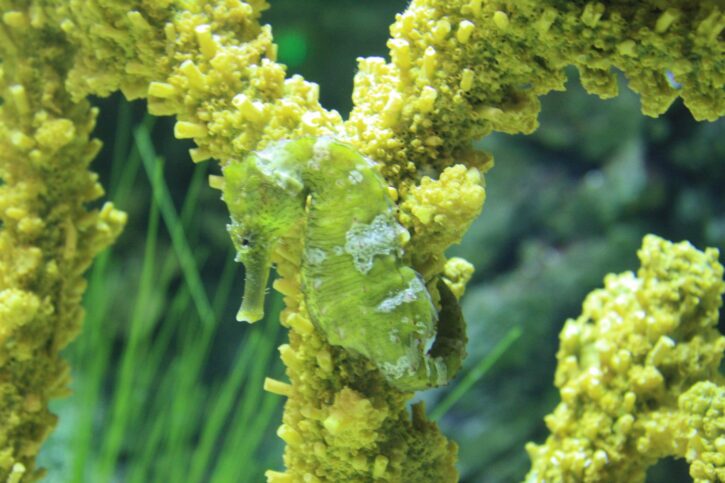 Seahorses are very slow swimmers. In fact, they are the slowest of all fish species. Unlike most fish, they do not have a caudal fin (a tail fin). Instead, they use one small fin on their back to propel themselves. This fin can beat back and forth 50 times per second. But its small size makes it fairly ineffective, especially in rough waters. 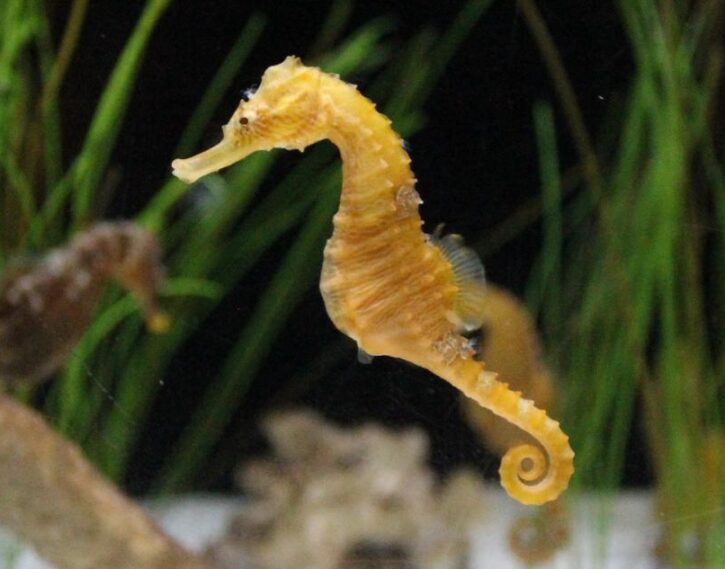 Though they may not be fast swimmers, seahorses do have the ability to swim forwards, backwards, up and down. They use small pectoral fins to steer, and they have a swim bladder (an air pocket inside their body) that controls their buoyancy. By changing the amount of air in their swim bladder, they can move up or down in the water. 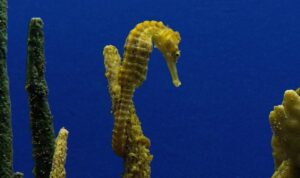 Seahorses also have prehensile tails. This means their tail can grasp or hold objects (similar to a monkey’s tail). Sometimes they hold onto things in order to anchor themselves in place, but they may also grasp a moving object in order to hitch a ride somewhere.

Seahorses do not have stomachs or teeth, and they must eat constantly. Lucky for them, they are effective hunters. Not only are they very silent and stealthy swimmers, they also have excellent eyesight. In fact, each eye can move independently of one another, so a seahorse could look backwards and forwards at the same time if it wanted to. Once they locate and sneak up on their prey, which includes tiny fish and crustaceans, they suck them up through their snout like a vacuum cleaner.

Seahorses can make sounds, similar to the sound of smacking lips. They make these sounds while feeding and during courtship.

During the breeding season, male and female seahorses partner up and stay together through multiple reproductive cycles. Some species of seahorses even mate for life. Every morning, the seahorse couple engages in a greeting dance that involves multiple twists and turns. Sometimes they wrap their tails together and spiral around an object. This daily dance, which can last minutes or even hours, strengthens their bond and confirms to each seahorse that their partner is still alive. 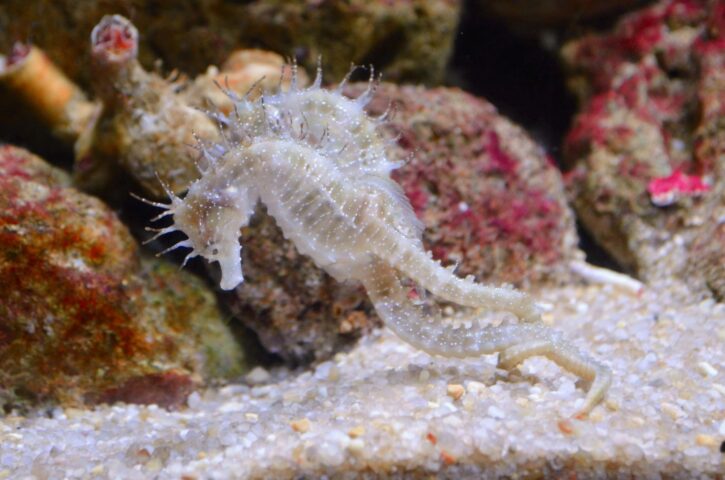 Seahorses are unique in that the male seahorse is the one who carries the young and gives birth. The only other animal who does this is the seadragon.

Once expelled into the water, the young seahorses float together in groups among the plankton. They must fend for themselves immediately after birth. As such, only about 5 out of every 1000 seahorse babies will make it to adulthood.

In the wild, seahorses have a lifespan of about 1-5 years. They are preyed upon by crabs, rays and tuna.

Many species of seahorses are considered by the IUCN Red List to be vulnerable of extinction with their populations decreasing. Threats to the seahorse include development, pollution and fisheries. They are also harvested for the aquarium trade and for traditional medicines.

You can donate to or join the Ocean Conservancy, an organization aimed at cutting down on sea waste and debris. 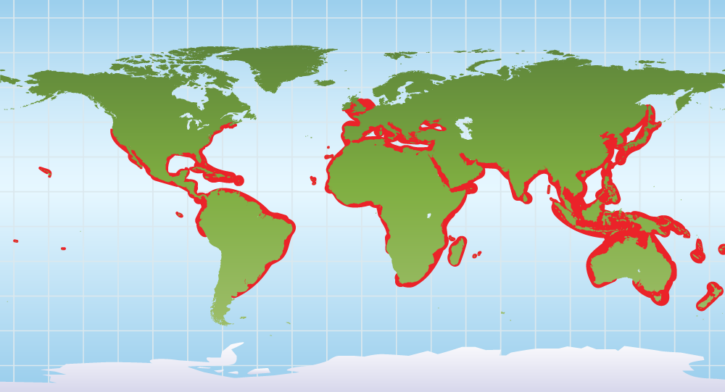 Seahorses can be found in tropical and temperate coastal waters around the world.

Abi Cushman is a contributing editor of Animal Fact Guide and My House Rabbit. When she's not writing about weird animal facts, Abi writes and illustrates funny books for kids. Her debut picture book, Soaked!, is available now from Viking Children's Books.