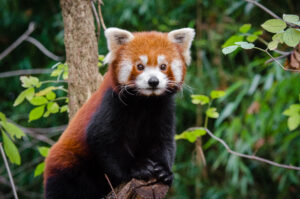 Sometimes people call red pandas “lesser pandas” or “firefoxes”. But red pandas are actually not closely related to giant pandas, foxes, or even raccoons. Instead, the red panda, with its distinctive round face, red and black fur, and bushy ringed tail, is in a family of its own, Ailuridae.

When red pandas were discovered in 1825 by French zoologist Frédéric Cuvier, he gave them the name Ailurus fulgens, which means fire-colored, or shining, cat. And with their cinnamon-red and black markings, “fire-colored” is an apt description. Red pandas are about the size of a house cat, with bodies about 56-63cm (22-25 in.) in length and tails about 37-47cm (15-19 in) in length.

Fossils found in North America show that red pandas once lived there five million years ago. But today, their range is limited to the mountain forests of Nepal, India, Bhutan, China and Myanmar. The word “panda” is thought to come from the Nepali word, “ponya”, which means bamboo eater or bamboo-footed.

Red pandas are one of the few animals that consume bamboo as their main source of nutrition, and they have a few special adaptations for this specialized diet. (Other bamboo eaters include giant pandas, bamboo lemurs and bamboo rats.) 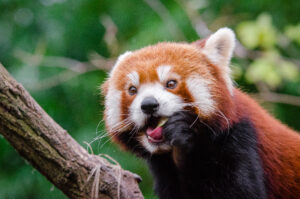 Similar to the giant panda, the red panda has a protruding wrist bone that acts like a thumb. This false thumb helps the red panda grip bamboo stalks and tree branches. Red pandas also have powerful molars to gnaw on the tough, fibrous bamboo.

A red panda must eat 1-2 kg (2-4 lb.) of bamboo per day in order to get enough nutrition. Unlike the giant panda, red pandas prefer nibbling on bamboo leaves and fresh shoots as opposed to the stalks. A female red panda was once recorded as having eaten 20,000 bamboo leaves in one day! Red pandas need to eat so much bamboo because they can only digest about 24% of it.

Though their diet is made up of mostly bamboo, red pandas sometimes also eat grass, fruit, eggs, insects and small animals. Interestingly, they are classified as carnivores (meat eaters), even though they mainly eat plants.

Red pandas spend most of the day resting or sleeping. They are crepuscular, meaning they are most active in the early morning and late afternoon. When it’s cold, red pandas wrap themselves up in their bushy tail and go into a deep sleep called torpor. In torpor, their body temperature lowers and their respiration rate goes down. This helps them conserve energy. 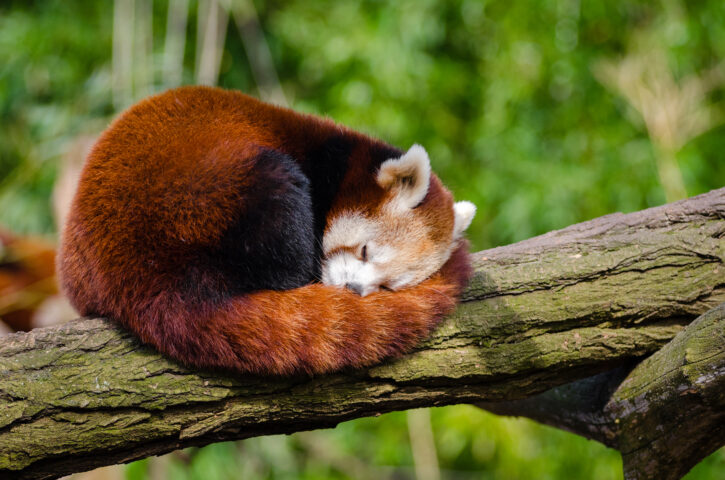 Red pandas are arboreal, meaning they spend most of their time in trees. They have certain physical characteristics that make them well-suited for this environment. Sharp, retractable claws allow them to grip branches and climb down tree trunks head first. Long tails help them keep their balance.

Their red coats blend in well with the reddish moss that grows on the tree trunks in their habitat, while their black undersides make it difficult to see them from below. This camouflage helps protect them from predators such as snow leopards and dholes (Asian canids related to dogs and foxes).

The soles of their feet do not have paw pads and instead are covered in fur. This keeps their feet insulated in the cold weather and covers the scent glands in their paws, which they use to mark their territory. Like raccoons, red pandas use their paws to scoop up water to drink. Like cats, they wash themselves by licking their paws and then wiping their faces and bodies. 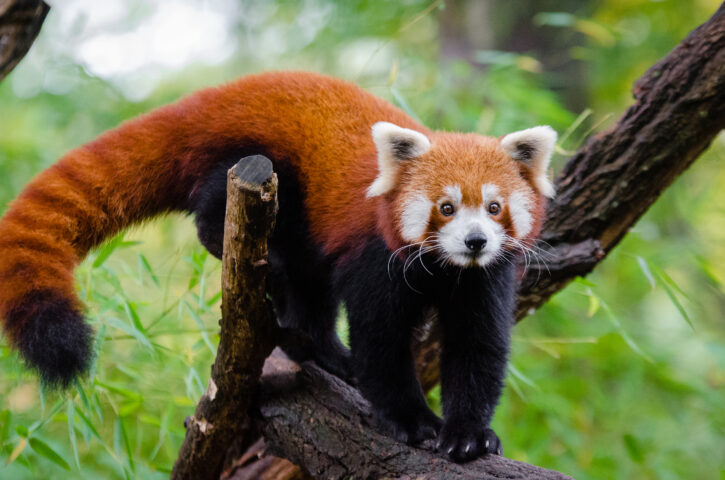 Red pandas have a few ways of communicating. When threatened, they stare, bob their heads, arch their tails and stand up on their hind legs. They can also scratch and release a foul odor from scent glands at the base of their tail. Though usually quiet, they can produce a range of sounds including “huff-quacks”, warning whistles, bleats, and high pitch twitters.

Though normally solitary animals, red pandas pair up during the breeding season from January to April. A female red panda is only fertile for 1-2 days a year. Once pregnant, it takes three months for her to give birth to a litter of cubs. Litters generally consist of 2 cubs, but their size can range anywhere from 1-4.

A few days before she gives birth, a red panda creates a nest out of twigs, leaves, moss and grass in a tree hollow, rock crevice or under a stump. Cubs are born with thick gray fur. Their eyes and ears are shut. To ensure their safety, their mother moves them around to different dens, carrying them in her mouth.

After about 2-3 weeks, the cubs open their eyes and ears. They nurse for about 3-5 months, and then start eating solid food. At this time, their gray fur changes to red. The cubs fully mature and leave the den after about 18-20 months.

In the wild, red pandas live around 8-10 years. 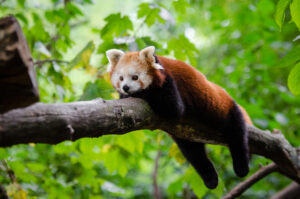 According to the IUCN Red List, the red panda is considered endangered, and their population is fragmented and decreasing. Threats to the red panda include habitat loss and poaching.

How You Can Help

You can help red pandas by donating to organizations like WWF and Red Panda Network, which work with local communities to protect red panda habitat and ban the hunting and poaching of red pandas. You can also participate in eco tourism. 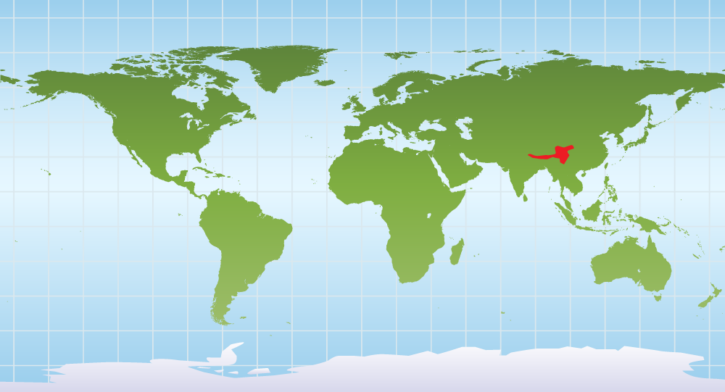 Blog Posts about the Red Panda