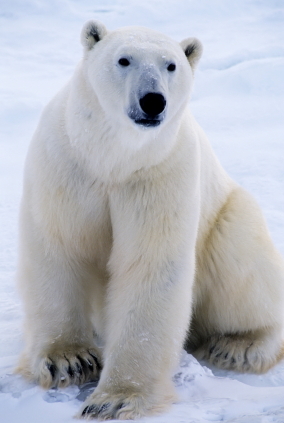 Although they appear white or yellow in color, their fur is actually clear and hollow, and their skin is black. Their visibly pale coloring is caused by the reflection and scattering of light.

Inhabiting the ice and sea of the Arctic, polar bears are well-equipped for survival in a harsh environment. Two coats of fur and a thick layer of blubber help insulate the polar bear’s body from the cold, keeping its temperature at an even 37° C (98.6° F). In addition, polar bears’ paws are especially adapted for walking on the ice and swimming in the sea. Hairs and bumps on the soles of their feet provide traction, while webbing between their toes allows for effective swimming strokes.

Polar bears are also equipped with strong noses. They use their powerful sense of smell when hunting for seals, their main source of food. They can smell a seal’s breathing hole, or aglu, up to one mile away. Once located, a polar bear will wait patiently by the hole and attack the seal’s head when it comes up for air. In ideal hunting conditions, the bear will just eat the seal fat, leaving the carcass for other animals. However, when food is scarce, polar bears will eat just about anything. Supplemental foods include walruses, short-legged reindeer, birds, bird eggs, kelp, and beached whales. When in proximity to human settlements, they have even been known to eat garbage such as Styrofoam. 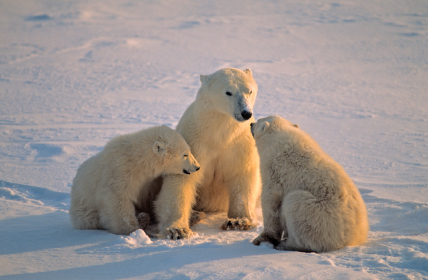 Polar bears do not hibernate like other bears, but females do enter into a dormant state while pregnant. After mating in the spring, a female polar bear spends the summer ingesting large amounts of food and building a maternity den in a snow drift to prepare for the arrival of her cubs.

In the fall, she enters into a dormant state, remaining this way even as she gives birth. The litter, usually two cubs, will spend two years with their mother learning essential hunting and survival skills.

Polar bears are currently listed as vulnerable by IUCN’s Red List. Global warming greatly impacts the fate of the polar bear. A reduction of large masses of ice results in limited access to seals. Not only does this adversely affect the health of adult polar bears, it also hinders the successful reproduction and nourishment of new bear cubs. Rising temperatures also result in unstable maternity dens, as snowdrifts melt and collapse. 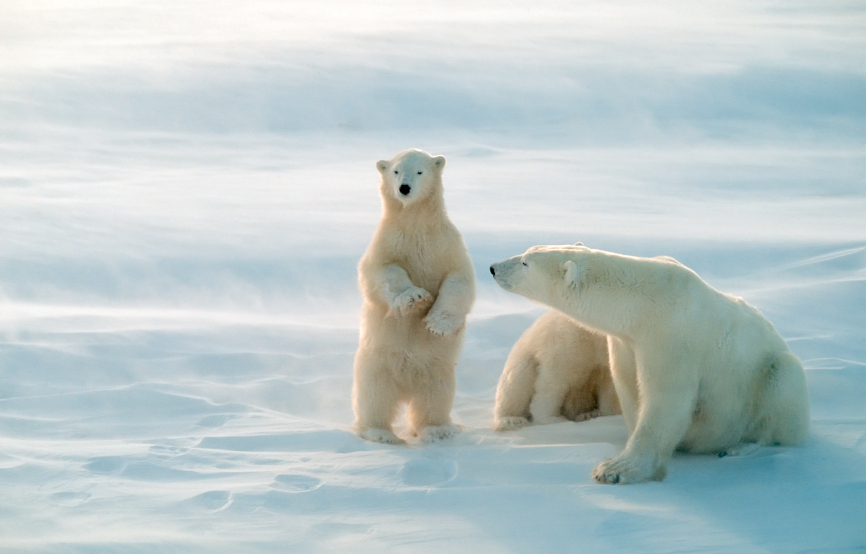 To help save the polar bear habitat, you can support the Climate Reality Project, which urges world leaders, companies, and communities to take action in curbing global warming. 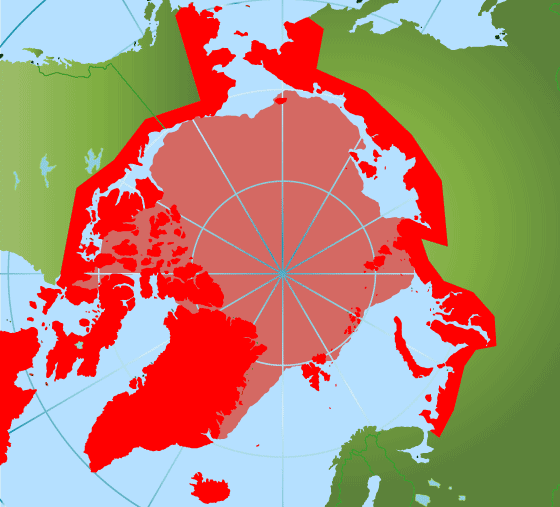 Polar bears inhabit the sea and ice masses of the Arctic circle.

Blog Posts about the Polar Bear