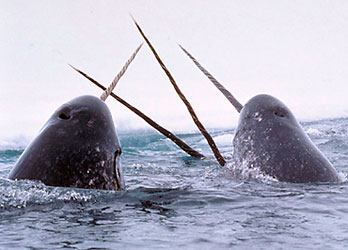 Narwhals are mid-sized whales living in the cold waters of the Arctic Circle near northern Canada and Greenland. They grow between 4 and 6 m (12-20 ft.) in length – a similar size to their relative, the beluga whale.

But they are easily distinguished from their beluga kin. Male narwhals possess a great spiraled tooth that projects from their heads. The long, hornlike tooth can reach up to 3 m (10 ft.) in length and grows continually to replace wear. Researchers are unsure of the exact purpose of the tooth. Some believe it serves as an attractive ornament for mating, while others believe it is used as a weapon to fight rivals. One researcher concluded that the tooth has the ability to detect changes in water temperature and pressure.

Narwhals also have a second tooth that measures about 30 cm (1 ft.) long, but it remains embedded in the skull. Some females have been spotted with a protruding tooth, though not nearly as long as that of the males. There have even been some males with two long protruding teeth.

Once they are mature, females will give birth to a calf once every 3 years. The pregnancy lasts for about 14 months, and calves are born in the spring.

Like many other whales, narwhals travel in groups. Their pods average 15-20 whales. Sometimes multiple pods will meet in social groups of up to 100 whales, although it is hard to get exact numbers. Narwhals have proven difficult for researchers to tag and track, mainly due to the cold and icy water conditions and the fact that narwhals do not come very close to shore.

Narwhals feed more regularly in the winter, consuming fish like cod and halibut, shrimp, and squid. Preying on creatures primarily on the bottom of the sea, they dive on average 800 m (.5 mi.), but can go twice that. The dives last around 25 minutes. In the summer, narwhals feed rarely, having stored up enough energy during the winter feeding season. They return to the same feeding grounds each year.

Narwhals are preyed upon by polar bears and walruses if they get trapped by shifting ice. Off shore they are attacked by killer whales (also known as orcas), to whom they are also related. In the summer, narwhals are also hunted by Inuits using kayaks and spears.

Narwhals are currently considered a species of least concern by the IUCN Red List, but many of the areas inhabited by narwhals are subject to drilling and mining, which produces waste that is dangerous to all animal populations. Narwhal populations are also negatively impacted by climate change. The reduction of sea ice allows more killer whales into the nearshore areas where narwhals spend their summers.

One way you can help is to get involved with the Whale and Dolphin Conservation Society. 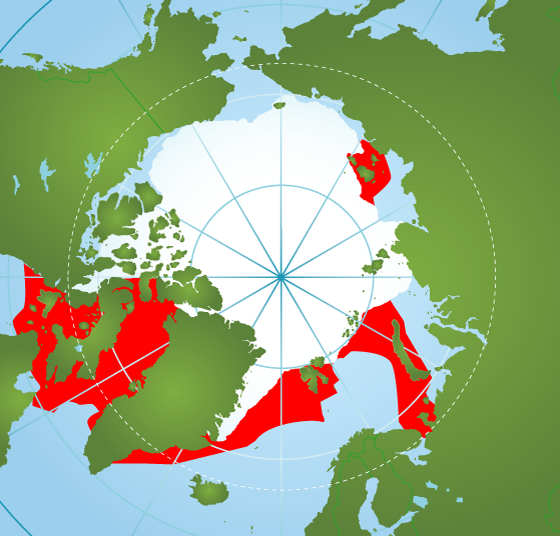 Narwhals inhabit the cold waters of the Arctic Circle near northern Canada and Greenland.

Blog Posts about the Narwhal