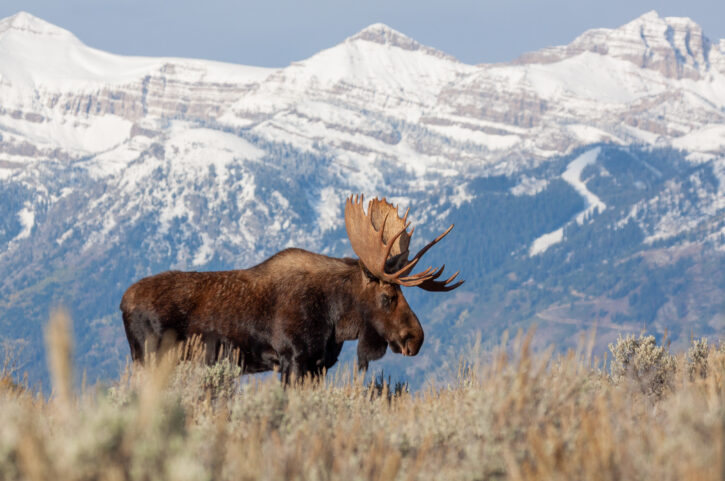 The huge bodies of moose are covered in thick, dark brown fur. Female moose, called cows, may have lighter brown faces. Their overcoat fur is hollow which helps insulate their bodies against cold weather. The combination of hollow outer fur and the dark brown inner fur help absorb and trap heat and keep snow from their bodies.

Moose are found in cold climates. They live in the northern part of the continental United States, Alaska, and Canada. They live in forests that include ponds, streams, swamps, or other water sources. Water is very important for moose because when summer temperatures rise, moose will submerge in water to cool off. They are also very good swimmers. 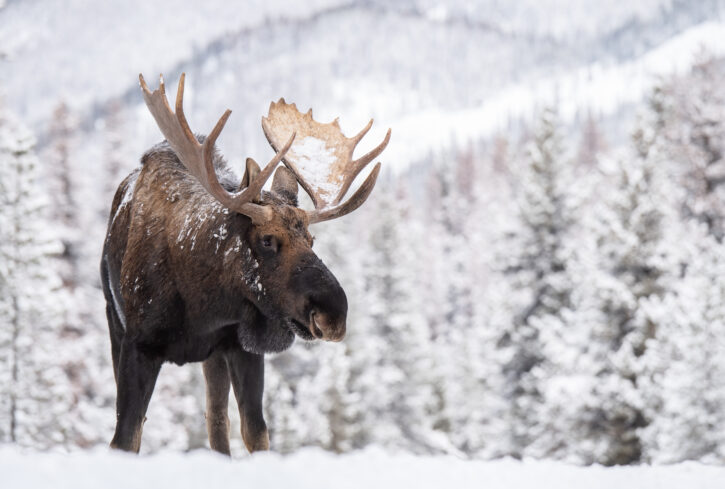 Water also provides moose with food. No, not fish. As herbivores, or plant-eaters, moose will eat aquatic plants. They also eat leaves, twigs, buds, and bark from many types of trees, including willow, aspen, and fir trees. The word ‘moose’ actually mean ‘twig eater’ in Algonquin. They can eat 20-30 kg (approx. 40-60 lbs.) of food each day.

Among the predators of moose are black bears and coyotes. They prey on young calves. They can also die of parasites, excessive tick bites, or collisions with cars. Moose are also hunted, but this is generally well regulated.

When fall arrives, moose start to hear the call to mate. Bulls will establish a territory and make a low grunting sound to attract cows. They also release a strong scent that drifts throughout their territory. The bulls are so consumed by this pursuit that they don’t eat during this time.

The bulls begin preparing for mating season in the spring with the development of antlers. Moose with fully developed antlers are more likely to attract a mate. If two bulls are interested in the same cow, they will try to scare their rival off with their larger antlers and will use them to fight if necessary. Their antlers fall off after mating season and the process will start over again in the next spring.

In the following spring or summer, the babies, called calves, are born . Usually one calf is born at a time, but twins are possible. One of the amazing things about calves is that they can walk a few hours after they are born and only a few weeks later, they can swim.

At birth, they weigh about 11kg (25 lbs.), but by their first fall they can gain 135-180 kg (300-400 lbs.). The calves stay only with their mothers, who feed and protect them. A mother will charge or attack any animals or people who threaten her calf.

The lifespan of a moose is about 15-25 years in the wild.

While moose populations are of least concern for extinction, they do face threats from climate change. Rising temperatures cause many problems for moose. When temperatures are high, moose will skip eating to try to find a cool spot to rest instead. This causes them to not be healthy enough to have calves due to being underweight. Warmer temperatures also cause more parasites, like ticks, to develop. Thousands of ticks can latch on to a single moose, draining it of blood which can lead to death.

What You Can Do to Help Moose

To help, you can advocate for more renewable energy resources, like wind and solar. These will help reduce carbon pollution, which contributes to climate change.