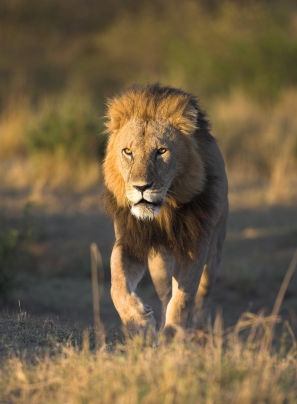 Living in the grasslands, scrub, and open woodlands of sub-Saharan Africa, the lion is the second largest cat in the world. It is dwarfed slightly by the tiger, which is closely related and has a very similar body type.

Unlike other cats, lions are very social animals. They live in groups, called prides, of around 30 lions. A pride consists of up to three males, a dozen related females, and their young. The size of the pride is determined by the availability of food and water. If resources are scarce, the pride becomes smaller.

Pride members keep track of one another by roaring. Both males and females have a very powerful roar that can be heard up to 8 km (5 mi.) away.

Males and females take on very different roles in the pride. Male lions spend their time guarding their territory and their cubs. They maintain the boundaries of their territory, which can be as large as 260 sq. km (100 sq. mi.), by roaring, marking it with urine, and chasing off intruders. Their thick manes, a unique trait to male lions, protect their necks when they fight with challengers. 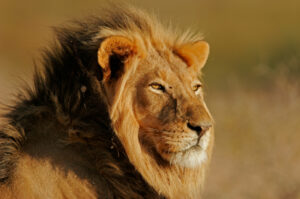 Female lions are the primary hunters of the group. They are smaller and more agile than males. But since their prey is still generally faster than them, they use teamwork to bring an animal down. Fanning out, they form a semicircle, with the smaller, weaker lionesses herding the prey towards the center. Then the stronger females knock the animal down and make the kill.

After a successful hunt, all the lions in the pride share the meal. But there is a pecking order, with the adult males taking first claim, followed by the lionesses, and finally, the cubs.

Lions have a fast-working digestive system, which allows them to gorge themselves and then go for seconds shortly after. If available, they will drink water everyday. But they can go 4-5 days without drinking by obtaining moisture from the stomach contents of their prey.

Spending 16-20 hours of the day sleeping or resting, lions are the laziest of the big cats. They can be found lying on their backs with their feet up or taking a snooze up in a tree. While lazing around, they are very affectionate towards one another, rubbing heads, grooming, and purring.

Lionesses give birth to 2-3 cubs at a time. Usually a couple females give birth around the same time. The cubs are then raised together, sometimes nursing communally. 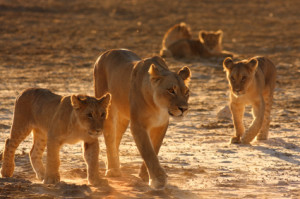 Vulnerable to predators like hyenas, leopards, and black-backed jackals, cubs have a 60-70% mortality rate. They are sometimes trampled by large animals like buffaloes. Furthermore, when another group of male lions takes over a pride, they kill all the cubs so they can sire their own with the lionesses.

Female cubs stay with the group as they age. At around two years old, they become capable hunters. But young males are forced out of the pride at that age. They form bachelor groups and follow migrating herds until they are strong enough to challenge male lions of other prides. In general, a group of males stays in power in the pride for around three years before another bachelor group takes it over.

African lions are considered vulnerable of extinction by the IUCN Red List. They are threatened by loss and fragmentation of habitat. They are also killed by humans in bravery rituals, as hunting trophies, for medicinal powers, or by ranchers protecting their livestock. Furthermore, they are susceptible to tick-borne diseases like canine distemper and babesia. Distemper is spread to lions by neighboring village dogs as well as hyenas. Babesia occurs during droughts, when malnourished prey is vulnerable to disease. The ticks spread to the lions after they kill the sick animal. The combination of distemper and babesia causes mass fatalities in lion populations.

You can help save lions by donating to charities like National Geographic’s Big Cat Initiative, Panthera’s Project Leonardo, or the African Wildlife Foundation. 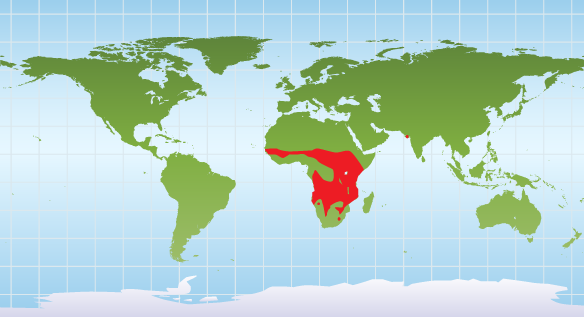 Blog Posts about the Lion