When early European settlers first encountered koalas in Australia, they thought the tree-climbing animals were bears or monkeys. Even today people still incorrectly refer to koalas as “koala bears.” But koalas are actually marsupials, closer related to wombats and kangaroos. 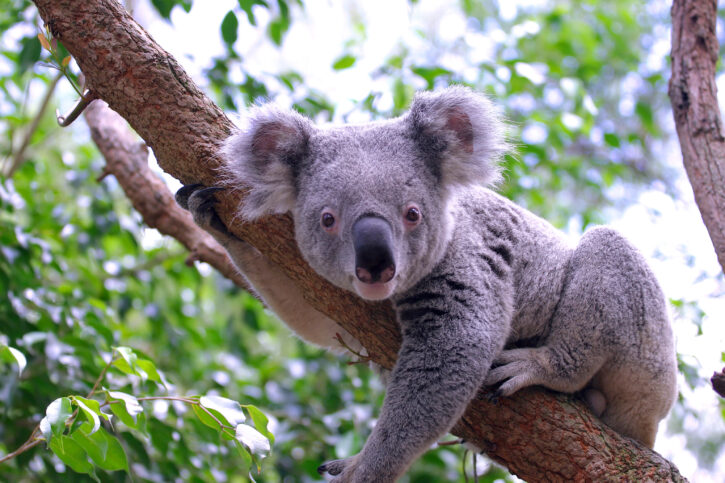 As marsupials, female koalas have pouches where their young stay until fully developed. Unlike kangaroo pouches, which open towards the top, koala pouches are located towards the bottom of their bodies and open outward. The baby koala, or joey, won’t fall out of the pouch because the mother koala uses a strong sphincter muscle to keep the pouch closed.

Koalas have special physical characteristics that complement their tree-dwelling lifestyle. With two opposable digits, their forepaws are well-adapted to gripping branches and picking eucalyptus leaves, their main form of nourishment. They have tough textured skin on the soles of their feet and long sharp claws which provide traction. Strong thigh muscles aid in climbing. Extra thick fur on their bottoms and a cartilaginous pad at the base of their spines provide cushioning so koalas can sit comfortably on branches for hours. They also have a curved backbone and two fewer pairs of ribs than most mammals (11 instead of 13). This creates a curled skeletal structure that fits well into the forks of trees. 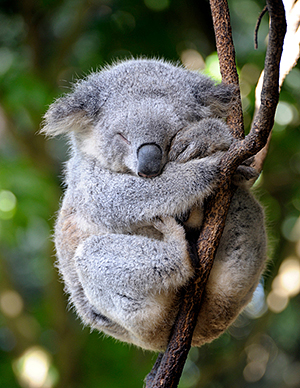 Koalas also have special adaptations that enable them to feast on eucalyptus leaves. Very fussy eaters, they use their excellent sense of smell to select the best tasting leaves. Although there are 600 types of eucalyptus trees, koalas generally limit their diet to two or three favorite kinds. In addition, eucalyptus leaves are highly fibrous and poisonous to other animals. But koalas have bacteria in their stomachs that break down the fiber and toxic oils and allow them to absorb 25% of the nutrients. In order to survive on such a low calorie diet, they conserve energy by moving slowly and sleeping around 20 hours a day.

Koalas inhabit the forests of eastern Australia, but there are a few differences between northern and southern subspecies. They range in length from 60-85 cm (2-3 ft.), but northern koalas are on the smaller side, weighing 4-8.5 kg (9-19 lb.), while southern koalas weigh 7-13 kg (15-29 lb.). Southern koalas also have thicker fur to keep them warm in the colder winters.

Koalas are territorial animals who live separately in their own home ranges. A home range consists of suitable trees that provide food and shelter and overlaps slightly with other koalas’ home ranges. Koalas define their territories by making scratch marks on trees; males also secrete a sticky brown substance from a scent gland in their chests that they rub on the bark.

From August to February, koalas meet in the overlapping areas to mate. A koala’s pregnancy lasts 35 days. When the joey is born, it is only 2 cm (less than an inch) long. It is hairless, blind, and has undeveloped ears. But the newborn does have very strong forelimbs and an instinct to climb from the birth canal into the mother’s pouch. There the baby finds a nipple, which swells in its mouth keeping the joey in place. 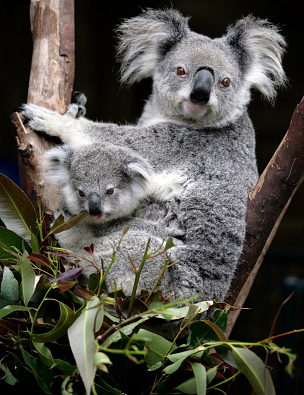 After the joey spends 6 months in the pouch developing, the mother koala will produce a special substance called pap. Pap is a soft, alternate form of fecal matter that consists of the bacteria necessary to digest eucalyptus. In order for the joey to start eating leaves, it will need the bacteria in its intestines. So the joey feeds on pap in addition to milk for several weeks before leaving the pouch.

A joey will stay with its mother for 6 more months after first venturing out of the pouch. In this time, the joey learns how to grasp leaves with its hands and returns to the pouch to hide or sleep. When the joey becomes too large, it may ride on its mother’s back or abdomen. At 1 year of age, the joey can live on its own.

In the wild, koalas live around 10-15 years. They only have a few natural predators, including dingoes, large owls, eagles, and goannas, which generally only target juveniles.

The IUCN Red List classifies the koala as vulnerable with their populations decreasing. Motor vehicle accidents and dogs are major causes of death for koalas, along with disease. The largest threat they face, however, is loss of habitat caused by land clearing/development, bushfires, and eucalyptus tree dieback. Eighty percent of the original habitat has been destroyed since Europeans settlers came to Australia. Furthermore, the majority of the remaining land is owned privately and is not subject to legislative protection.

If you would like to help koalas, you can write to the Australian Environment Minister to advocate listing the Southeast Queensland koala population as critically endangered and protecting koala habitat more effectively. You can also “adopt” a koala or plant a eucalyptus tree by donating to the Australian Koala Foundation.

Blog Posts about the Koala