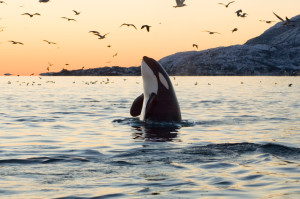 With sleek black backs and bright white bellies and eye patches, killer whales, or orcas, are easily distinguishable from other aquatic animals.

One of the ocean’s largest predators, male orcas can grow to 9.5 m (32 ft) in length, while females are slightly smaller at 8 m (23 ft). They live primarily where the water is cold but can live anywhere from the polar regions right up to the equator. This massive range makes orcas the most widespread of all sea creatures.

True to their name, killer whales are effective hunters. They prey on seals, sea lions, fish, sea birds, turtles, octopuses, and squid. Orcas will even attack other whales, including the enormous blue whale which can measure over three times their size. They have also been known to breach the surface to grab sea lions and seals, even partially jumping onto ice floes to reach their target.

Killer whales hunt in pods, or groups, in a way similar to wolves. They circle their prey and force them into smaller areas before attacking. Once cornered, the orcas take turns biting and ramming their prey.

Sending sound waves that travel underwater, killer whales use echolocation as a means for hunting. The reverberating sound provides information about an object’s location, size, and shape. Echolocation is also used as a form of communication. Each pod has a distinctive sound it uses to communicate among its members.

There are thought to be three types of pods: transient, resident, and offshore. Transient pods are constantly on the move following food sources. Resident pods generally stay in one area close to shore, while offshore orcas prefer the open waters. Currently, scientists are not clear as to why there are contrasting pod behaviors. Some believe it is because there are actually several species of orca, but more research must be conducted in order to test that theory. 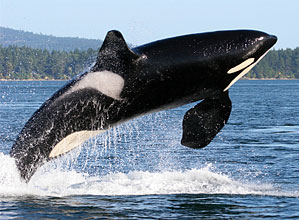 In resident pods, killer whales of both genders will live with their mothers for their entire lives, forming matrilines. In this way, resident pods consist of very tight, stable bonds and can comprise of 10-50 whales. Offshore pods are also large, made up of 30-60 whales. Transient pods, on the other hand, tend to be smaller (around 2-5 whales), as offspring will generally leave the group when a sibling is born.

When females reach 6-10 years old, they are ready to bear young. Males need to be older to breed, roughly around 10-13 years of age.

Mating can take place at any time of year and only occurs between members of different pods to avoid interbreeding. After 17 months of gestation, calves are born in the water tail first. Female orcas can give birth every 3-10 years.

Newborns are very carefully protected within the pod. Often younger females will help new mothers protect their calves. Killer whales are also known to shelter injured or ill members of their pod from danger.

At present killer whales are not endangered. They have not been widely hunted by humans but are susceptible to some of the same threats as other marine mammals, including pollution, overfishing of their prey, and habitat infringement. They live an average of 30 to 50 years in the wild.

You can help orcas by spreading awareness about their special abilities to hunt, communicate, and live cooperatively. Write to your legislator about preserving their ocean habitat and keeping it free from pollution. 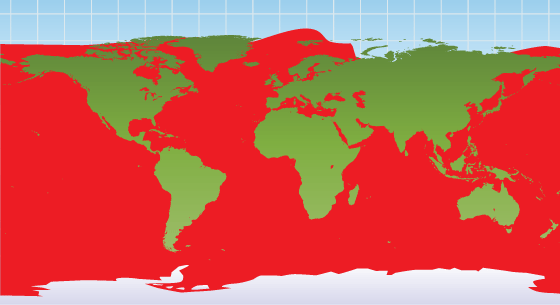 Orcas can live anywhere from the polar regions right up to the equator. This massive range makes orcas the most widespread of all sea creatures.

Blog Posts about the Killer Whale