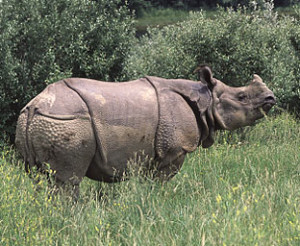 Also known as the Indian rhinoceros, greater one-horned rhinos inhabit northern India and Nepal. Its single horn distinguishes it from its African counterparts, who all have two horns.

Creating folds that look like armor, the skin of the greater one-horned rhinoceros is brownish-gray with raised wart-like bumps on the neck, shoulders, and legs.

Grazing in flood plain areas, greater one-horned rhinos have prehensile lips that are specially adapted to grasp the grass they eat. They occasionally eat leaves, fruit, and crops as well.

To combat the heat, the rhinos eat during the cooler parts of the day and immerse themselves in nearby rivers and mud holes during the hottest parts of the day. Although they weigh up to 2200 kg (4800 lb.), greater one-horned rhinoceroses are considered to be good swimmers. Sometimes, they eat the aquatic plants they encounter. 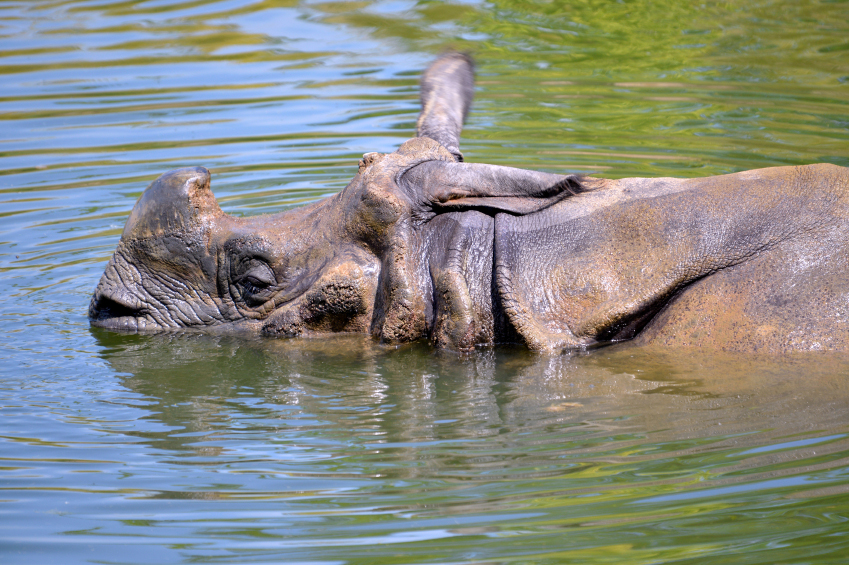 Rhinoceroses have poor eye sight. However, they make up for it with their exceptional hearing and sense of smell. In fact, they use their enhanced sense of smell to seek out other rhinos during the mating season.

At around 4-6 years old, female rhinos are ready to mate. The males are generally ready around age 9, but only the largest and most dominant male rhinos will mate. After a 15- to 16-month gestation period, the female rhino will give birth. She will give birth again in 1-3 years. Male rhinoceroses do not help in rearing the young.

Generally solitary creatures, except for mothers and offspring who stay together, greater one-horned rhinos live in loosely-defined territories. These territories are marked with urine, feces, and glandular secretions. That said, the rhinos may meet up at watering holes without fighting.

Greater one-horned rhinoceroses are currently listed as vulnerable on IUCN’s Red List with as few as 2700 left in the wild. India and Nepal have strengthened their opposition to poaching and have created protected parks and reserves which has helped bolster the population. Traditionally, rhinoceroses have been killed for their horns because some Asian cultures believe the horns have medicinal value. But in fact, there is no evidence to suggest that rhino horns, which are largely made of keratin (like our hair and fingernails), have any medicinal value at all.

To help in the conservation of the greater one-horned rhinoceros, you can donate to the International Rhino Foundation. 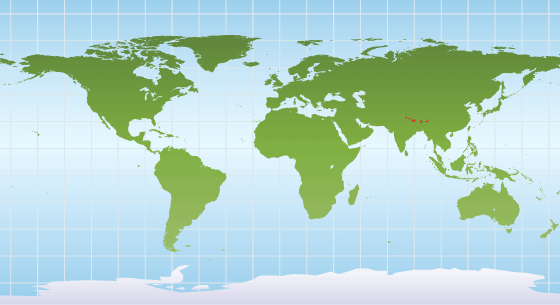