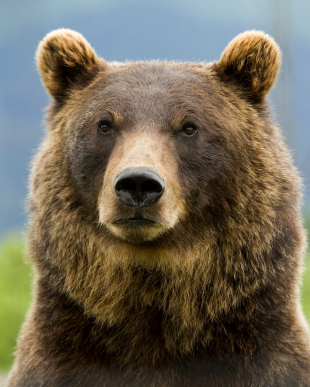 Standing as tall as 2.5 m (8 ft) and weighing up to 360 kg (800 lbs.), the grizzly bear is a subspecies of brown bear that inhabits western Canada and the northwestern United States.

Grizzly bears have a multitude of strengths. They are highly intelligent and have excellent memories. Detecting food from great distances away, grizzlies have an astute sense of smell, even better than that of a hound dog.

They are good swimmers and fast runners, reaching speeds as high as 50 km/h (35 mph) over land. Young grizzlies also have the ability to climb trees to evade danger, but this skill fades as they become bigger.

Grizzly bears are specially adapted to survive the changing seasons. During warmer months, they eat a massive amount of food so they can live off body fat during the winter, when food is scarce. They may intake 40 kg (90 lbs.) of food each day, gaining over 1 kg (2.2 lbs.) of body weight a day.

As omnivores, grizzlies will eat anything nutritious they can find, gorging on nuts, fruit, leaves, roots, fungi, insects, and a variety of animals including salmon and other fish, rodents, sheep, and elk. Their diet varies depending on what foods are available for the season.

In the fall, as temperatures cool and food becomes scarcer, grizzlies dig dens in the sides of hills. They have long rounded claws (the size of human fingers) and a large mass of muscles on their backs that help them dig. These characteristics, along with small rounded ears and white-tipped (or “grizzled”) fur, distinguish grizzly bears from black bears. 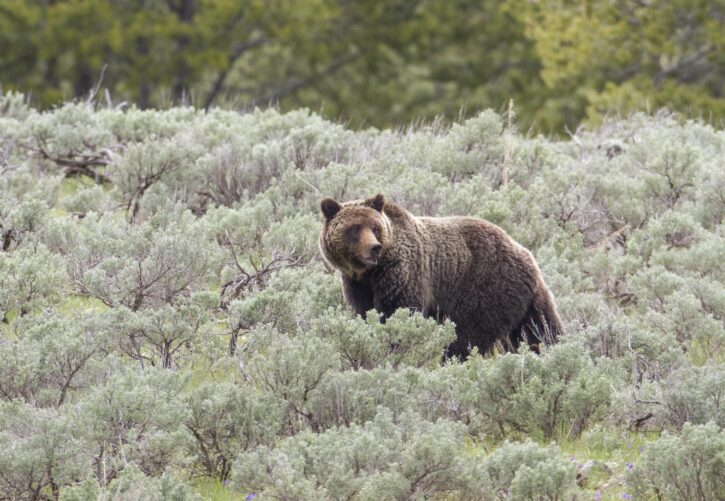 In the winter, grizzly bears settle in to their dens and enter a deep sleep called torpor, which allows them to conserve energy.  Their heart rate slows down from 40 beats per minute to 8, and they do not go to the bathroom at all during these months of slumber. This deep sleep is commonly referred to as hibernation, but bears are not true hibernators. True hibernators, like chipmunks, deer mice, groundhogs, snakes, and some bats, enter an even deeper sleep state, reducing their heart rates even more significantly and lowering their body temperatures to near freezing.

Midwinter, pregnant grizzly bears wake up from their sleep to give birth, but return to their slumber afterwards. Grizzly bear cubs (usually born in pairs) arrive into the world blind, hairless, and toothless. They use what little strength they have to nestle into their mother and nurse. For a month, the cubs feed on their mother’s milk and gain strength. By the time spring comes, the cubs have opened their eyes and grown teeth and fur; the new family is ready to venture outside the den.

The cubs stay under their mother’s care for 2-3 years. While mother grizzlies are fiercely protective of their cubs, nearly half the cubs do not survive past the first year, falling to disease, starvation, and predators like wolves, mountain lions, and adult male grizzlies.

Brown bears are considered a species of least concern by the IUCN. However, the grizzly bear subspecies is listed as threatened by the U.S. Fish and Wildlife Service. Grizzly bears are threatened by habitat loss due to logging, development, and mining. Human interaction also poses a threat to grizzlies. When bears are drawn close to humans, attracted by livestock, garbage, and other food, they are often exterminated. Furthermore, in Canada, people hunt grizzlies for trophy (where it is legal to do so). In the U.S., sometimes grizzlies are shot by people mistaking them for black bears, which are not protected. 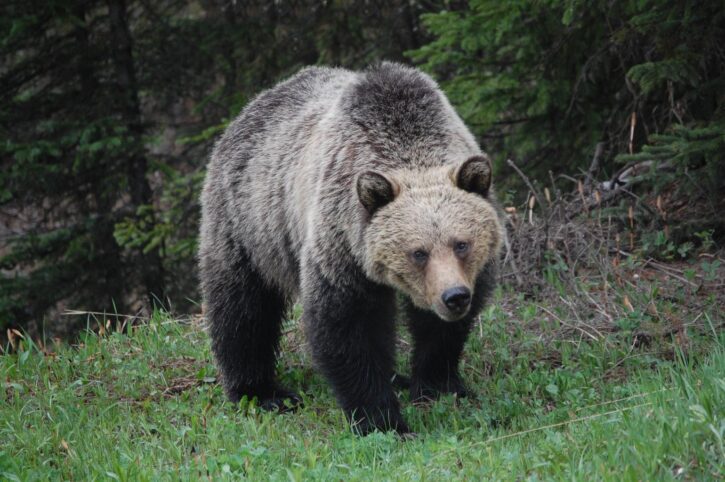 If you would like to help grizzlies, you can donate to organizations such as Defender of Wildlife and National Wildlife Federation, which help preserve grizzly habitat and work toward minimizing human-bear conflicts (with measures like bear-resistant dumpsters and electric fences).

When living in or visiting grizzly bear habitat, do not feed the bears, and keep all garbage securely contained. 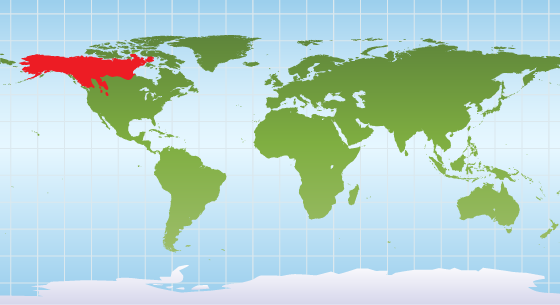 Blog Posts about the Grizzly Bear