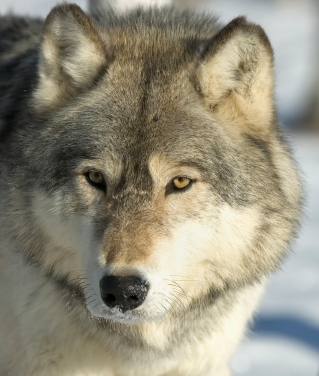 Playing a major character in fairy tales and mythology throughout the ages, the gray wolf (or timber wolf) has been perceived in many different lights, from “Big, Bad Wolf” to spiritual being. In reality, gray wolves may not embody such extreme vices and virtues, but they do play a vital role in maintaining ecological harmony.

Although they are called gray wolves, these ancestors of domestic dogs actually range in color from brownish-gray, to all black, to all white.

Gray wolves are the largest of all canines. At 60-90 cm (2-3 ft.) at the shoulder and 1.5 m (4.5-6.5 ft.) in length, gray wolves vary in weight from 25-60 kg (55-130 lb.). They are also one of most widespread land mammals, inhabiting various ecosystems throughout North America, Europe, Asia, and a small portion of Africa. In general, gray wolves’ size and weight increase the further north they reside.

Gray wolves are social animals, living and hunting in packs of 2-12. A typical pack is composed of an alpha male and an alpha female (the pack leaders), their pups, and several subordinate or juvenile wolves. The pack members exhibit close relationships and communicate with each other with a range of sounds including barks, whines, growls, and howls. 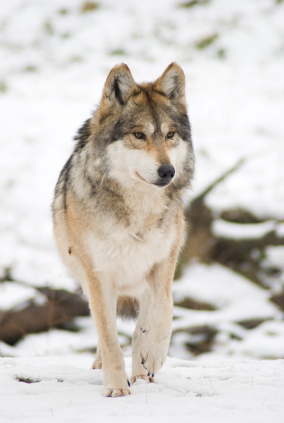 In general, only the dominant male and female breed to prevent the pack from becoming too large. The alpha couple will begin the bonding process early in the year and will mate in January or February. The alpha female then chooses a den site and gives birth to a litter of about six pups, who will reach maturity at 2-3 years old.

If a subordinate wolf feels a strong inclination to breed, and his/her attempts to mate are denied by the alpha pair, the subordinate wolf may leave the pack. However, leaving the safety of the group can prove to be a dangerous choice for the lone wolf, who may have to travel hundreds of miles to find a new territory and mate.

Gray wolves are known as keystone predators because they help maintain a balanced ecosystem. Their diet consists of ungulates (large hoofed mammals) such as elk, deer, moose, and caribou, as well as smaller mammals like beavers and rabbits. Because gray wolves eliminate only weak animals, herds become stronger and healthier as a whole. In fact, studies have shown that gray wolves have helped prevent the spread of chronic wasting disease, a contagious neurological disease, in deer. 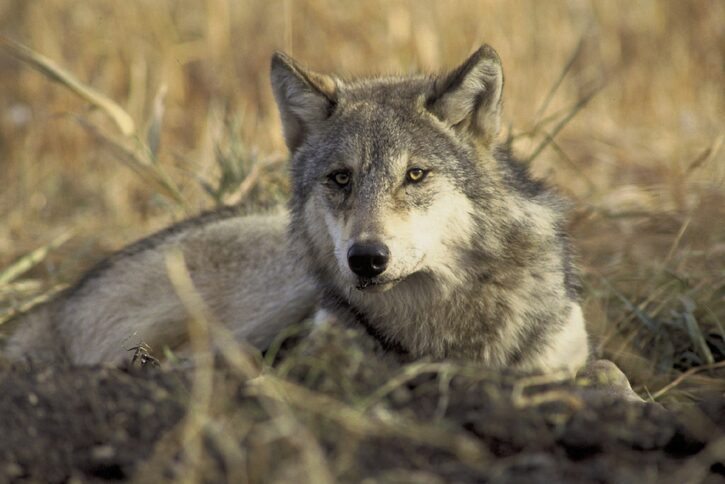 Furthermore, in Yellowstone Park, researchers found that the presence of wolves forced herds of elk to move around more frequently, thereby allowing aspen and willow trees to flourish in areas where they had previously been overgrazed. This, in turn, resulted in the return of beavers and riparian birds to the region.

According to IUCN’s Red List, gray wolf populations have been determined to be stable in many parts of the world, including Asia, Europe, and northern North America. So on a global level, the gray wolf is considered a species of least concern. However, the gray wolf is considered very vulnerable of extinction on a regional level, due to loss of habitat, trapping, shooting, and poisoning.

If you would like to help gray wolves, there are several things you can do. You can “adopt” a wolf through organizations like Defenders of Wildlife or the National Wildlife Federation. These organizations support several initiatives that help gray wolves, such as banning aerial gunning in Alaska, fighting to preserve federal protections, and helping ranchers find effective ways to protect their livestock so they refrain from killing wolves.

You can also help by supporting gray wolf habitat protection. 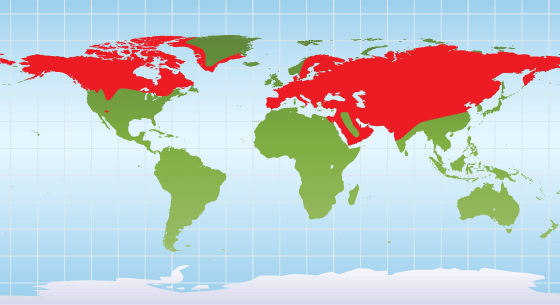 Gray wolves are also one of most widespread land mammals, inhabiting various ecosystems throughout North America, Europe, Asia, and a small portion of Africa.

Blog Posts about the Gray Wolf