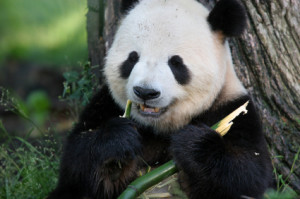 Native to the mountain forests of southwest China, the giant panda is one of the most beloved animals in the world.

Giant pandas are identified by their distinctive black and white coloring. Their ears, muzzle, eyes, shoulders and legs are black while the rest of their body is white. Their thick hair keeps them warm in the cool, wet mountain zones. When on all fours, giant pandas average between 60-100 cm (2-3 ft.) tall at the shoulder and between 1-2 m (4-6 ft.) long. They can weigh between 100-115 kg (220-250 lb.), with males being larger than females.

One of the interesting evolutionary traits of the panda is their protruding wrist bone that acts like a thumb. This helps the pandas hold bamboo while they munch on it with their strong molar teeth. Bamboo makes up nearly the entire diet of the panda. Due to the low nutritional value of bamboo, pandas need to eat 10-20 kg (20-40 lb.) a day. Occasionally pandas will eat other available food, including small rodents, eggs, fish and other flora. Bamboo provides a good amount of water, but pandas need to supplement this with fresh water daily. 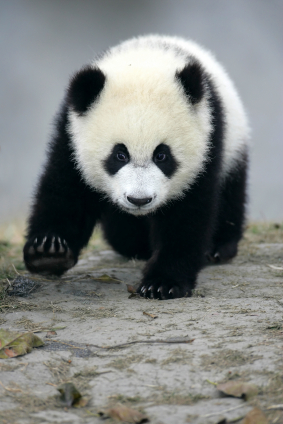 When pandas are between 4-8 years of age, they reach maturity and can reproduce. However, female pandas are only able to become pregnant for 2-3 days each spring! In this small window of time, male and female pandas find each other through scents and calls similar to that of goats or sheep. They do not roar like other bears.

Between 95 and 160 days of becoming pregnant, the female panda will give birth. The newborn cub is blind, hairless, and tiny, weighing only 85-140 g (3-5 oz.). Completely helpless, the cub cannot move much on its own for nearly 3 months. In turn, the mother is very protective and careful in tending to her cub during this time.

With only around 2060 pandas living in the wild, the giant panda is considered vulnerable of extinction by the IUCN Red List. Due to the fact that pandas reproduce so infrequently, it is very difficult for their population to recover from such a low point.

One the main reasons that panda populations have declined is habitat destruction. As the human population in China continues to grow, pandas’ habitat gets taken over by development, pushing them into smaller and less livable areas. Habitat destruction also leads to food shortages. Pandas feed on several varieties of bamboo that bloom at different times of the year. If one type of bamboo is destroyed by development, it can leave the pandas with nothing to eat during the time it normally blooms, increasing the risk of starvation.

To combat this issue, the Chinese government has actively worked to restore and protect bamboo habitat, and these measures have shown positive results. State Forestry Administration surveys have concluded that the panda population has increased since the Chinese government’s actions, and in 2016, the IUCN upgraded the giant panda’s status from Endangered to Vulnerable.

While an increasing panda population is good news for now, it is predicted that climate change will eliminate over 35% of the panda’s bamboo habitat in the next 80 years.

Wildlife reserves have been set up in parts of China to make sure the pandas have a home, and care is taken to make sure they survive in the wild. Researchers continue to study how pandas breed in an effort to increase the population. You can help by donating or adopting a panda through the World Wildlife Fund. 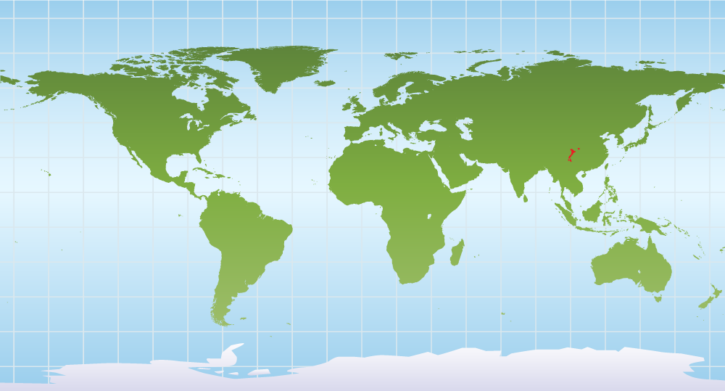 Around 2060 pandas live in the mountain forests of southwest China.

Blog Posts about the Giant Panda