The giant anteater lives up to its name: it is large and eats ants. In fact, giant anteaters are the largest species of anteater. Giant anteaters can grow to be 1.8-2.4 meters (6-8 ft.) from nose to tail and weigh between 25-45 kg (55-100 lbs.). Males and females are roughly the same size. 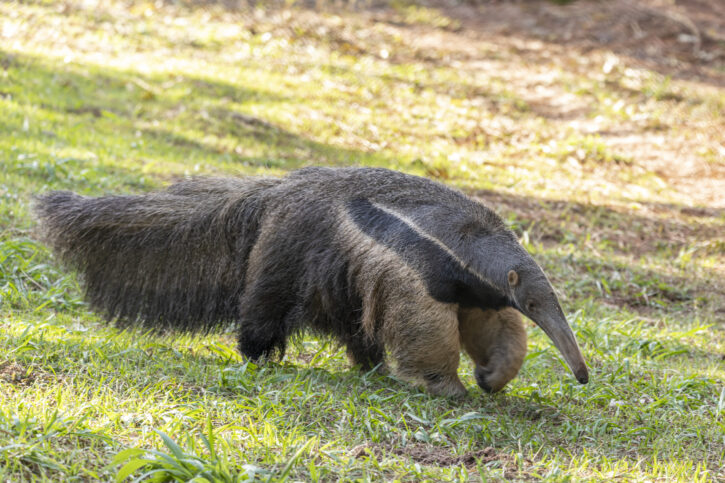 Giant anteaters have brown fur with black stripes and white front legs. They shuffle walk on the knuckles of their front legs because they tuck their claws into their fists to keep them sharp.

The head and tail of the giant anteater are very unique. Their tails are big and bushy, and can be used to provide shade or to sit on for extra height. They have a long snout, which has no teeth, but a very long tongue. Their tongues are a little more than 60 cm (2 ft.) long. 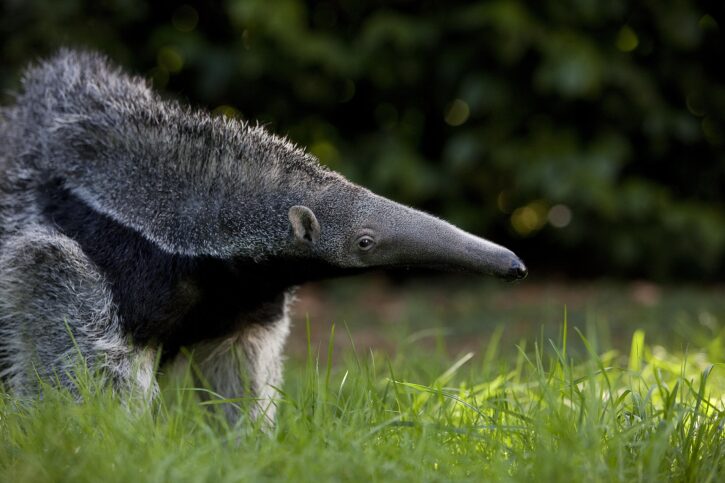 Not only is the anteater’s tongue super long, it’s also super sticky. Covered with sticky saliva, there are also tiny backward-pointing spines on their tongue. Giant anteaters can slurp up ants and termites up to 150 times in a minute. They only eat for a minute at each termite mound or ant hill so that they can get out before the insects start attacking. They can eat 30,000 to 35,000 ants or termites a day.

You might think giant anteaters also use their tongue to lap up water like other animals, but they rarely drink. Most of the giant anteater’s water comes from their food.

In the wild, giant anteaters can be found all over Central and South America, except for Guatemala, Uruguay, and El Salvador. They can live in a variety of habitats such as forests, wetlands, savannas, and grasslands. They keep a range of 1.5 to 2.5 km (1-1.5 mi.). Giant anteaters do not have a den and rest in many places in their range.

Giant anteaters breed at the beginning of the rainy season, between March and May. During this time the generally solitary animals come together. After a gestation period of 6 months, a single baby called a pup is born. Parents will stay together only while the mother is caring for the young. 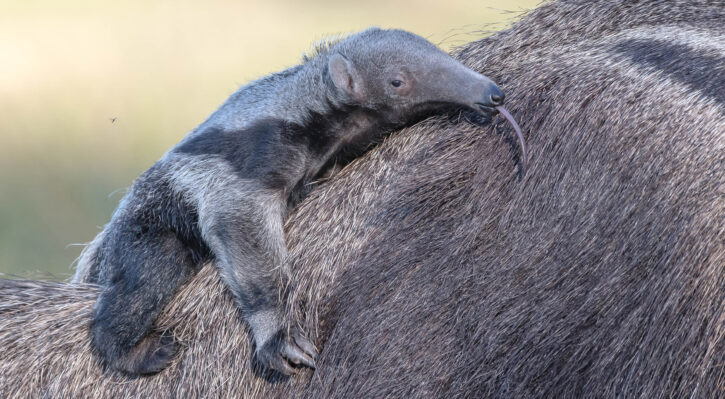 Pups look like tiny versions of their parents which helps them blend in when they ride on their mother’s back. The pups cuddle under their mother’s legs and nurse when they are not traveling around.

After 6-9 months, the pups stop riding on their mothers back and stop nursing. By 2 years old, they are on their own completely.

Giant anteaters are considered vulnerable to extinction by the IUCN Redlist. While they have predators, like pumas and jaguars, they are also killed by human hunters or captured by poachers. The biggest threat is habitat loss, which is forcing them out of their natural homes.

What You Can Do to Help Giant Anteaters

To help giant anteaters you can advocate for renewable energy, sustainable farming practices, and land conservation.

Blog Posts about the Giant Anteater