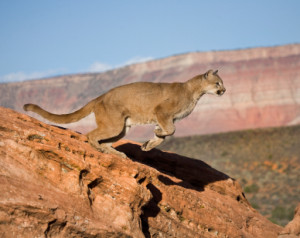 The cougar, which is also commonly referred to as a puma, mountain lion or panther, is the second largest cat in North America. Unlike other big cats, however, the cougar cannot roar. Instead, the large feline purrs like a house cat.

The coat of the cougar is a grayish tan to reddish color with lighter parts on the underside. The tail has a black spot on the end.

Inhabiting various ecosystems from mountains to deserts to sea-level, the cougar’s established range includes western North America, a small region in Florida, and most of South America. They make their home anywhere that there is shelter and prey.

Generally they prey on deer but also feed on smaller animals if necessary, including domestic animals and livestock. Cougars have even been known to eat insects. Skilled and cunning hunters, cougars stay hidden from their prey until they can pounce with claws out-stretched. Cougars can also climb with ease and leap over 6 m (20 ft.). After killing a large animal, a cougar hides the carcass and eats in the coming days. 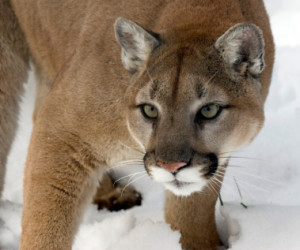 For the most part, the cougar has no natural enemies and sits atop the food chain. However, they occasionally compete with other predators such as bears and wolves for food.

During most of their lives, cougars are solitary creatures. They interact only to mate, which can happen at any time of year. Females can breed as early as 2-3 years old and give birth to 2-3 kittens at a time. They raise the young while the males return to their solitary lifestyles.

At around two years old, cougar offspring will leave their mother to start their own life. Some travel far to establish their own territory as cougars need a lot of room to roam.

A healthy cougar in the wild can live to around 10 years of age. In captivity, cougars can live as long as 20 years.

Cougars have been long been killed by both sport hunters and farmers protecting their livestock. Other threats to cougar populations include habitat loss and fragmentation and automobile accidents. As a result, the cougar population has significantly decreased. There are still, however, several thousand cougars in the wild, and as a result, they listed as being of least concern on the IUCN Red List.

Although they once ranged widely throughout North and South America, cougars were largely wiped out from the eastern portion of the United States and Canada by European settlers in the 1700s. There is a small population in Florida, a subspecies known as the Florida panther. The Florida panther is considered to be critically endangered, and agencies are working to maintain the current population.

Furthermore, in recent years, sightings of cougars in the northeast United States and eastern Canada have been on the rise. Although many are the result of former captive cougars who escaped or were released, there is a possibility of recolonization of cougars in the east.

What You Can Do To Help

It is difficult to stop habitat loss or reverse its effects, but there are some ways you can help. You can help persuade your congressperson to designate the cougar as a protected animal. This legally prevents the taking or injuring of cougars, unless they pose a threat. This law has been in effect in the state of California since the approval of Proposition 117 in 1990.

You can also appeal to your congresspeople advocating the preservation of open land in order to maintain a livable habitat for cougars. In addition, you can donate directly to the Mountain Lion Foundation. 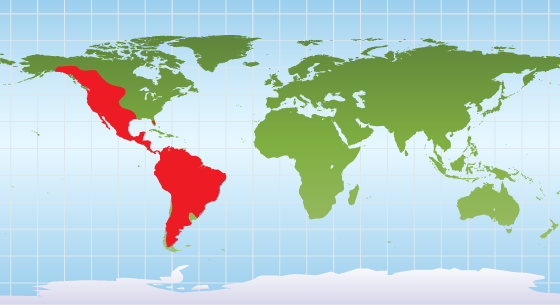 Inhabiting various ecosystems from mountains to deserts to sea-level, the cougar’s range includes western North America, a small region in Florida, and most of South America.

Blog Posts about the Cougar