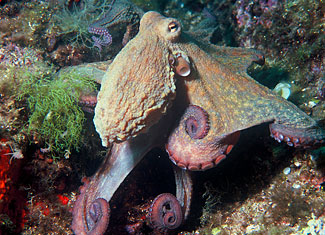 Found worldwide in the shallow waters of tropical, subtropical, and temperate areas, the common octopus is a fascinating creature.

At 60-90 cm (24-36 in.) long, it has eight long limbs protruding from a globe-shaped head (or mantle). Two rows of suckers line their tentacles and can sense taste.

While it was commonly believed that the octopus’s appendages were all arms, recent studies by marine experts have shown that two of the limbs act more as legs, allowing it to walk across the sea floor and push off when swimming. The octopus also has the useful ability to regenerate a tentacle if it loses one.

Similar to a squid, the common octopus is classified as a mollusk, which is a soft-bodied invertebrate with a shell. It has no skeletal structure but does possess a skull, which protects its brain. It also has a sharp beak and a toothed tongue called a radula, which it uses to pry open and drill into the shells of prey, like crabs and clams. Once it breaks into the shells, it may also inject a paralyzing poison into its prey.

When confronted with a potential threat, the octopus employs several defense tactics. In the first method, pigment cells in the skin contract to allow for uncanny camouflage abilities. In addition to changing color, they also adapt the texture of their skin and their body posture to blend in seamlessly with their surroundings.

The octopus may also adopt deflective markings to scare away potential predators. The areas around the eyes, suckers, arms, and web may darken so the octopus appears more threatening. Their coloration also reflects their mood. While their pigmentation is normally brown, octopuses may turn white, which shows fear, or red, which demonstrates anger.

Another defense tactic is flight. After releasing a cloud of purple-black ink, the octopus propels itself by funneling water from its gills at the top of its mantle through its siphon, located at the bottom of the mantle. It can reach speeds as high as 40 km/h (25 mph), but cannot maintain this speed for long.

Octopuses are solitary animals who make their homes in rocks and coral or dig burrows. They scatter rocks and shells (or midden) around their dens to hide them. They leave the dens only to eat or reproduce.

Soon after the eggs hatch, both the male and female octopuses die. They only live 12-18 months. Meanwhile, the hatchlings are carried by the currents, and they feed on plankton for 45-60 days. Only one or two of the hatchlings will survive to adulthood.

Currently, common octopuses are not considered endangered or threatened. However, octopus is a common food in Asian and Mediterranean cuisines. People catch octopuses by trawling (fishing with a large net) and by luring them into “octopus pots,” which are plastic traps that octopuses confuse as suitable dens. If trawling coincides with their breeding season or if overfishing occurs, octopus populations could be in danger. 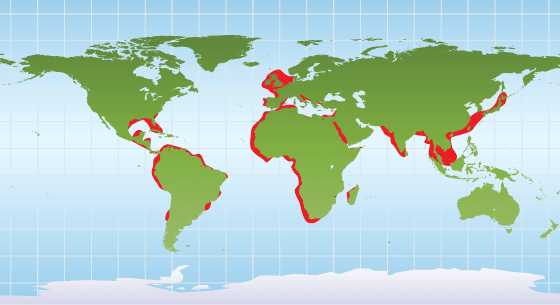 Common octopuses are found worldwide in the shallow waters of tropical, subtropical, and temperate areas.

Blog Posts about the Common Octopus