Soft, clean, and adorable may not be a phrase you would expect to describe a rodent, but it’s the perfect description for the chinchilla, a rodent native to the Andes mountains in South America. 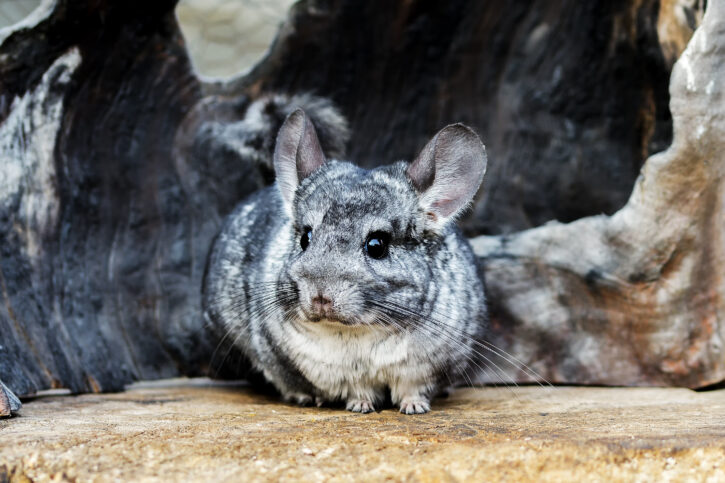 Chinchillas are best-known for their extremely soft, extremely dense blue-gray fur. Their fur offers them warmth and protection. A predator may end up with a mouthful of fur while the chinchilla escapes.

Other distinguishing features include their large dark eyes and large upright ears. They also have cat-like whiskers. These adaptations help them navigate at night when they are foraging for food. Chinchillas can be nocturnal (active at night) or crepuscular (active at dawn and dusk).

Larger than a guinea pig, but smaller than a cat, chinchillas are about 30 cm (12 in.) in length with a fluffy 12 cm (5 in.) tail on average. There are two types of chinchilla: the long-tail and the short-tail.

Chinchillas eat grass and other plants. They get enough water from the plants they eat but may supplement it as needed with morning dew. They have been known to occasionally eat insects as well. The regular chewing of plants helps keep their teeth, which grow constantly, from growing too much.

Another interesting fact about chinchillas is that they actually eat their food twice! After they eat plants, chinchillas produce a special kind of droppings, called cecotrophs, which they eat and re-digest. These cecotrophs contain undigested nutrients. 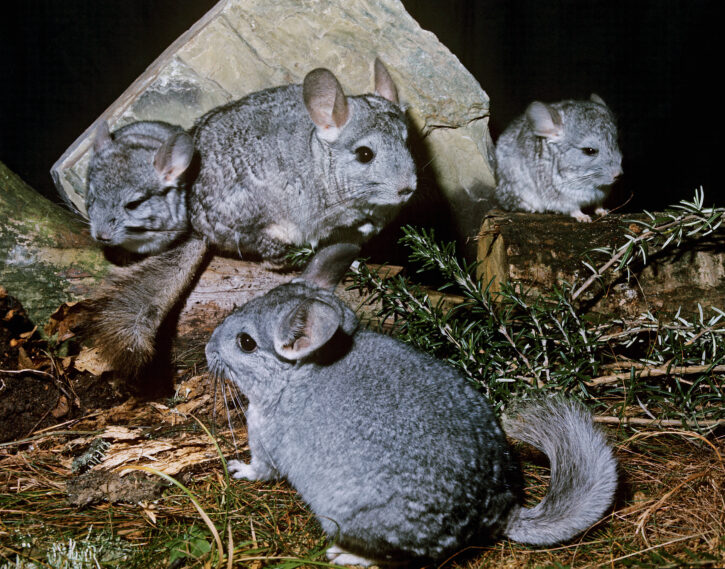 Chinchillas live together in large colonies and are highly social. Over 100 chinchillas can live together in a herd. One benefit of this is safety. When they venture out to forage, at least one chinchilla will act as a lookout. The lookout will call out an alarm if danger approaches. Predators of chinchillas include hawks, owls, foxes, and snakes.

Another benefit of their large colonies comes in raising young. Within their herds, groups of chinchillas are separated into families. Both the male and female help raise the young. They mate for life and produce 2 litters of 2-3 babies, called kits, each year. The females get aggressive during breeding season (May to November), but later they will help nurse the kits from other families. Kits are born with fur and nurse for up to eight weeks.

In the wild, chinchillas live around 8-10 years.

Chinchillas are endangered in the wild, even though you can probably see them at zoos or even pet stores. They are at risk because of habitat loss due to ranching, farming, and mining. They have also been trapped for their fur, which is used to make luxury items, like coats.