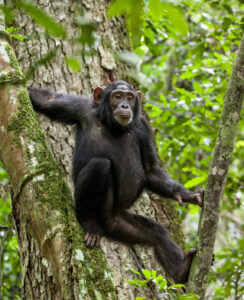 Did you know that a chimpanzee is not a monkey? Although chimpanzees and monkeys are both a type of mammal called a primate, chimpanzees are actually categorized as great apes.

Great apes are different from monkeys because they have bigger brains, bigger bodies, and no tail. Other great apes include bonobos, gorillas,  orangutans,  and humans. In fact, the chimpanzee and the bonobo are humans’ closest relatives. Chimps share about 98.6% of our DNA.

Chimpanzees have dark hair, which covers everything except their face, hands, and feet. Similar to humans, chimpanzees have opposable thumbs. These help them climb, eat, and use branches and leaves as tools.

In the wild, chimpanzees live in western and Central Africa. They make their homes in the trees of tropical rainforests, mountain forests, and savannas. 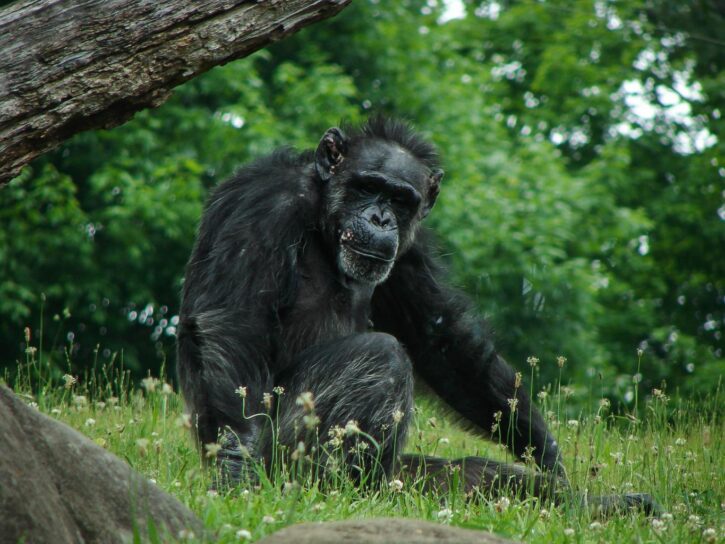 Chimpanzees eat fruit, seeds, leaves, flowers, honey and insects. In addition, they hunt and eat antelopes, goats, and smaller primates. Chimpanzees have been observed creating tools out of sticks to pull termites and ants out of mounds to eat.  Because they eat meat and plants, chimpanzees are omnivores.

Like humans, chimps are social. They communicate with body language, facial expressions, sounds, and touch. They live in loose communities of between 12-100 members. Within these communities, smaller family groups exist. Together, they groom each other, protect their home range from predators, and at times, gather food.

The primary predators of chimpanzees are leopards, as well as humans, who hunt them for food and to keep them away from their farmland.

A single male chimp or a small group of males will lead the community. Female chimps are the primary caregivers for young chimpanzees.

For the first 3 years of their life, young chimps feed on milk from their mother. During this time, they travel everywhere with her, first by holding onto her stomach and later by riding on her back. 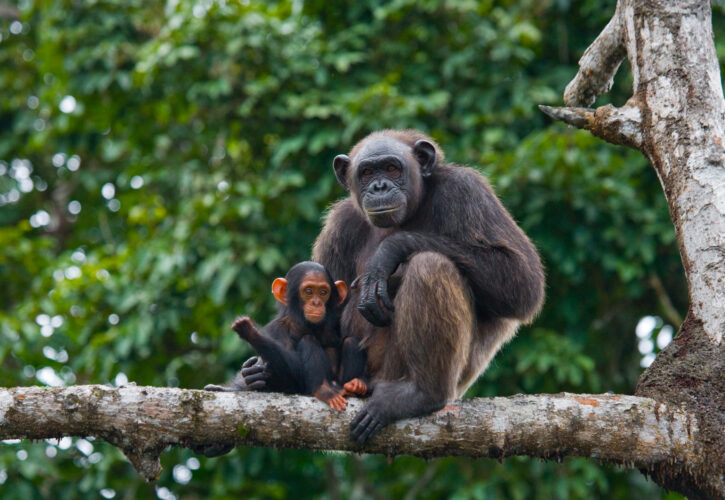 Even after they learn to walk and climb on their own, young chimps will stay with their mother until about age 7. By then, they will have developed their dark skin, a change from the pink they are born with, and they will have grown into their full height of 1-1.7 m (3-5.5 ft.).

The average life expectancy of a chimpanzee in the wild is about 33 years.

Hunting and human expansion has caused chimpanzee populations to decline to the point that they are now considered endangered by the IUCN Redlist.

What You Can Do to Help Chimpanzees

You can help by donating to an organization that helps enforce anti-poaching laws and creates national parks to protect the homes of chimpanzees. These include the World Wildlife Fund, the San Diego Zoo Global Wildlife Conservancy, and the African Wildlife Foundation.

Blog Posts about the Chimpanzee