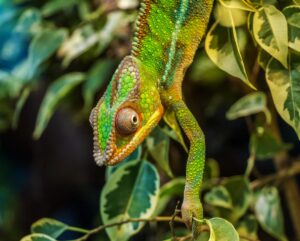 If you’ve ever watched a cartoon with a chameleon, you’ve probably seen it change color to blend in perfectly with the background, whether it’s pink, green, or plaid! But that is not quite the case in real life. While they can make small color adjustments to blend in to their background, usually, chameleons change color to reflect their moods, defend their territory or attract mates.

Nerve impulses and hormonal changes cause the pigments in the chromatophores to move, which block or expose the other layers of chromatophores. In this way, a variety of different colors and color patterns can be produced. 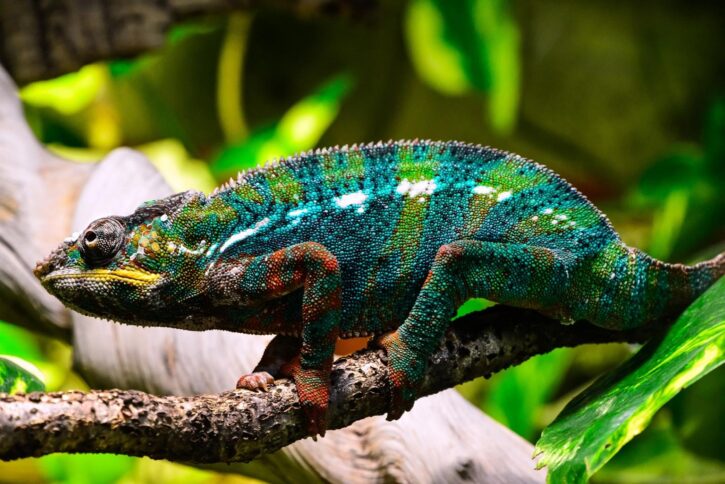 Chameleons do use camouflage, the ability to blend into their surroundings, to hide from predators such as snakes and birds. But in general, they rely on their natural state color, a greenish-brown, to blend in. When threatened, they prefer to stay still and remain hidden, but do have other means of defense if necessary. They can flatten out to appear bigger, and they can lash out with their feet and jaws.

Aside from their coloration, chameleons have other special characteristics. They have eyes that move in two different directions at once. Larger chameleons have tails that can move and grasp. Their feet are also adapted to grasp; they are more like birds’ feet  than the feet of other lizards. 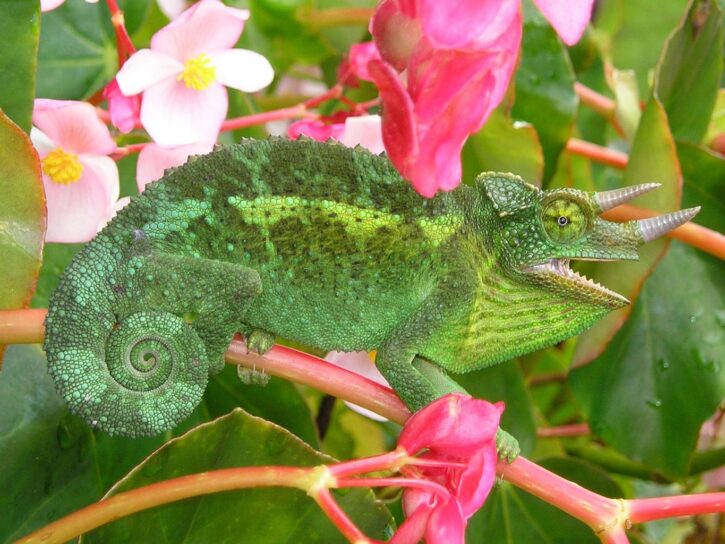 Some species of chameleons have crests or horns on their heads. Often the males have more than females.

One other amazing feature of chameleons is their tongue. Imagine being able to shoot your tongue across the room to eat a piece of popcorn. That’s what it’s like for chameleons. They can snap their tongue almost twice the length of their body and stick it to an insect. They are also known to eat spiders, snails, lizards and even birds. 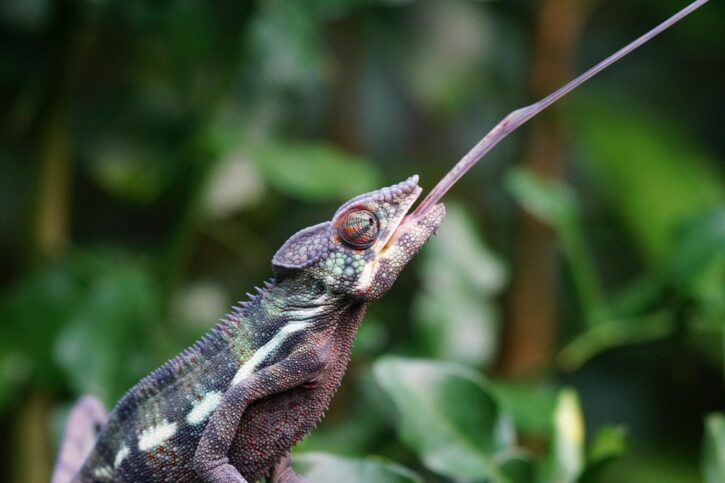 There are over 200 species of chameleons, ranging in size from 16 mm (0.5 in.) to 70 cm (27 in.) long. The many different types live in many different habitats. Some live in deserts. Some live in rainforests. Some live in steppes and savannas. Wherever they live, they tend to live in trees or bushes, but some live on the ground. They are native to Africa, Madagascar, parts of Asia, and the southern portions of Europe.

Chameleons are solitary animals, but males will approach females during the mating season. They try to impress the females by changing their skin to bright colors. If the female does not want to mate, she will turn a dark color and get aggressive, hissing and biting. If the female is available, she’ll stay the same color.

Most chameleons lay eggs. The female chameleon will dig a hole, lay her eggs, and cover them with dirt. She may lay anywhere from 2-100 eggs, depending on the species. Then after 4-24 months, the babies hatch and must fend for themselves.

Interestingly, there are some species of chameleons that have live births. The female chameleon will incubate her eggs, which don’t have shells, inside her body. Then after 4-6 months, she will give birth to anywhere from 8-30 baby chameleons.

According to the IUCN, the conservation status of chameleons range from Least Concern to Endangered depending on the species. The primary danger to chameleons is habitat loss. Many species are native to Madagascar, which has lost habitat due to farming and logging. They are also at risk due to capture for reselling as pets. 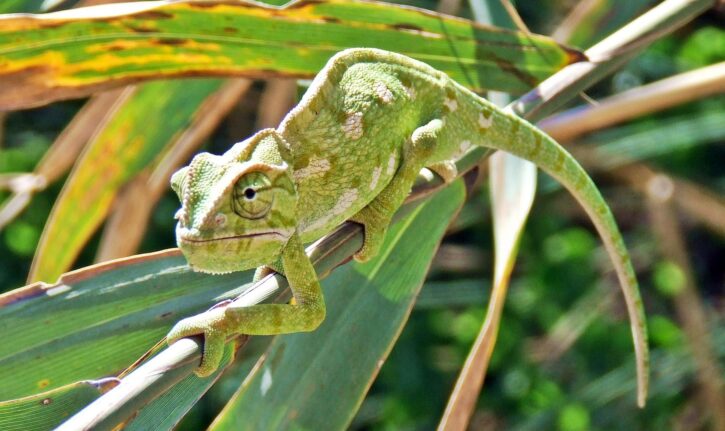 You can help by avoiding purchasing chameleons sourced from the wild. You can also advocate for sustainable farming in countries with native populations of chameleons.