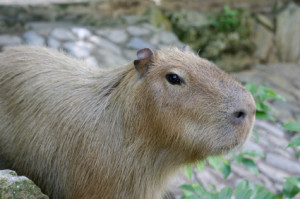 Capybaras are semi-aquatic, spending a lot of time in the water. They inhabit southern Central America and northern South America in both savannas and rain forests near ponds, rivers, or lakes.

A constant source of water is important to capybaras, who retreat into murky waters to escape from predators like jaguars, anacondas, caimans, pumas, ocelots, and harpy eagles.

Capybaras are physically well-adapted to a semi-aquatic lifestyle. Their webbed feet help them maneuver in water and traverse soft, muddy ground. Their facial features are located towards the top of their large heads, allowing them see and breathe while swimming. Capable of staying submerged for up to 5 minutes, capybaras can press their ears against their heads to keep water out. Once they exit the water, their thin coat of coarse hair dries quickly.

Spending the hottest portions of the day in water or wallowing in the shade, capybaras graze in the morning and evening when it’s cooler. They feed on grasses and aquatic plants, consuming 3-3.5 kg (6-8 lb.) a day.

Capybaras have special digestive adaptations that allow them to absorb enough nutrients from their highly fibrous diet. A large fermentation chamber, or cecum, in their intestines stores and churns the fibrous materials while mixing in bacteria, enzymes, and gases that aid in digestion. Capybaras also eat their own droppings – an activity called coprophagy. Coprophagy allows them to ingest a higher percentage of proteins and other nutrients.

Very social animals, capybaras live in small family groups of about 10-20. A typical group includes one dominant male, several females, their offspring, and a few subordinate males. The dominant male, usually the heaviest, stares down the other males in the group, driving them to the outer edges of the group. Here, the subordinate males act as sentinels (or lookouts), performing warning barks when a predator is near.

In some cases, a subordinate male will challenge the leader. The two capybaras will charge each other, rear up onto their hind legs, and engage in a scuffle until one flees the scene.

Usually, a group of capybaras has a ratio of one male to two females. The ratio is preserved because the subordinate males in the periphery of the group are more susceptible to predation. Also, juvenile males are sometimes forced out of the group once they reach sexual maturity, leaving them to fend for themselves. Without the protection of the group dynamic, these bachelors become easy targets.

Being the dominant male has several advantages. Not only does he enjoy a position toward the center of the group, safer from predators, he also mates with all the females in the group.

Capybaras mate in the water. After a 5-month gestation period, the female capybara will give birth to four to five babies. After a few days, when the babies join the rest of the group, they are communally nursed by all the females. In this way, all the offspring in the group stay together. 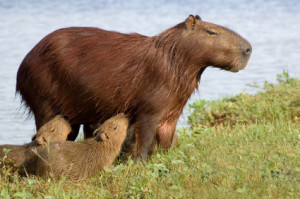 Baby capybaras are not effective swimmers at first, so they stay on land, hiding under brushy cover. Their smaller stature and inability to swim well make them susceptible to predators like foxes, vultures, feral dogs, and piranhas.

Capybaras can live 8-10 years in the wild, and around 12 years in captivity.

Although capybaras are currently considered by the IUCN Red List to be of least concern of becoming extinct, their populations have been largely affected by hunting in the past. People eat capybara meat and produce leather from their skin. In the countries where capybara populations started to dwindle, hunting restrictions were enacted, and capybara numbers stabilized. 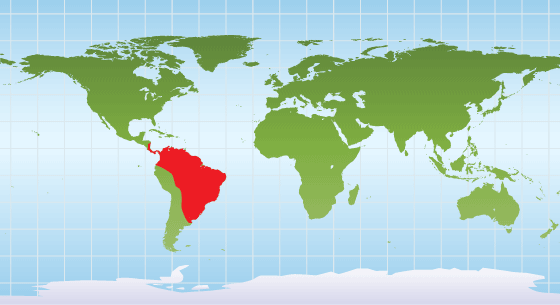 Capybaras inhabit southern Central America and northern South America in both savannas and rain forests near ponds, rivers, or lakes.

Blog Posts about the Capybara