The brown-throated three-toed sloth is a truly unique animal that inhabits the rainforest canopies of Central and South America. The term sloth is synonymous with the word slow, and sloths certainly live up to that definition. 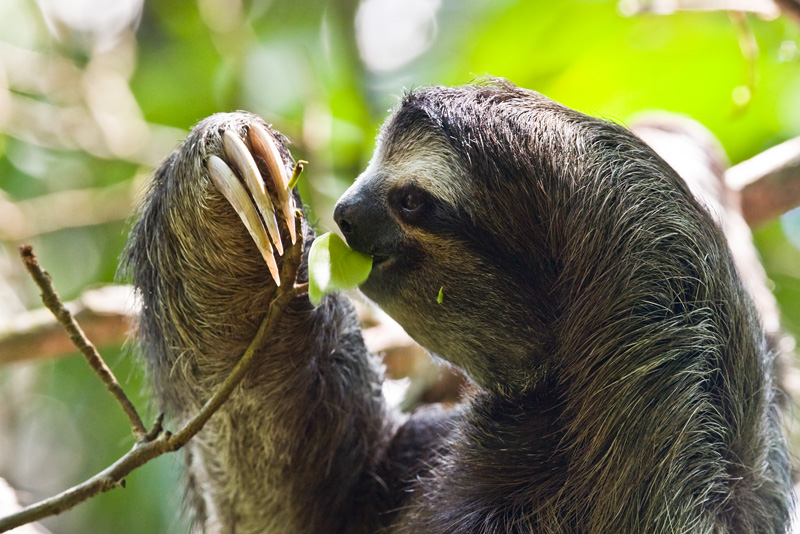 Sloths evolved to expend very little energy because their diet does not provide them with a lot of calories and nutrition. Brown-throated sloths primarily eat tough, rubbery rainforest leaves. These leaves are also full of toxins (a form of protection for the rainforest trees). But sloths have developed a digestive system to handle these highly indigestible leaves. Their stomachs are multi-chambered, similar to a cow’s stomach, and house a mix of bacteria which helps to slowly break down the leaves. It takes two weeks for a sloth to digest one meal — the slowest digestion time of any mammal!

Sloths are specially adapted to live among the treetops. Their fur hangs upside down, running from their stomachs to their backs. This is because sloths themselves usually hang upside down. The orientation of their fur helps the rain water flow away from their body.

In addition, sloths have large curved claws to help them effortlessly grasp branches and vines, and hang comfortably while they eat and sleep. Brown-throated three-toed sloths, as you may have guessed, have three toes and three claws per foot. But interestingly, even two-toed sloths have three toes per foot! The difference is that they only have two claws on each.

Brown-throated sloths have the ability to rotate their heads like owls. They can turn their heads up to 300 degrees due to their unique neck structure. They have nine cervical vertebrae (the bones in the spine that support the head), as opposed to the seven that most mammals have. This allows for greater rotation, which helps the sloth scan for predators like spectacled owls, harpy eagles and snakes. 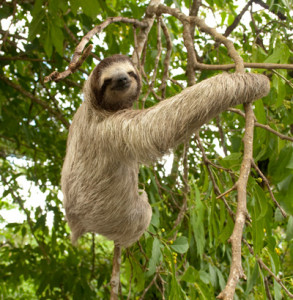 Once a week, brown-throated three-toed sloths descend from the rainforest canopy to urinate and defecate. Although their large curved claws help them immensely in the treetops, they make traveling on the ground very difficult. Sloths crawl very awkwardly and slowly on the ground, making them easy targets for predators like ocelots.

But sloths take the risk to climb down to the ground because of a symbiotic relationship they have with the flora living in their fur. Sloth fur is rife with macro- and microorganisms like algae, fungi and moths. While these organisms benefit from having a sheltered place to live among the long coarse hairs, the sloth also gains from the relationship. The algae provides supplemental nutrition for the sloth and tints the fur green, which helps camouflage the sloth among the leaves. The fungi helps fend off parasites known to cause diseases like malaria and Chagas disease. The moths provide fertilizer for the algae.

When sloths descend from the canopy, they come in contact with the beneficial fungal spores in the soil. In addition, the moths have a chance to lay their eggs in the sloth’s dung. In this way, a complete ecosystem thrives between the sloth and the organisms living in its fur.

Male brown-throated three-toed sloths can be easily distinguished from females because they have a bright orange patch with a black stripe on their backs. This patch has scent marking glands that attracts female sloths. Alpha males have a larger patches than other males.

The mating season for brown-throated sloths is in the spring, which is July-November in South America and February-May in Central America. Female sloths give birth to one infant at a time. The baby sloth spends 5-10 months attached to its mother, using her body like a jungle gym. This helps prepare the baby for life hanging in the treetops. 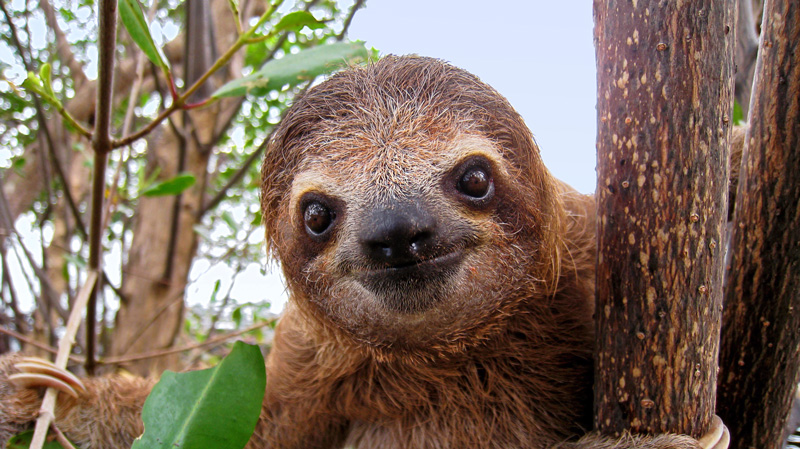 The brown-throated sloth is classified as a species of least concern by the IUCN because it has a wide distribution in the Amazon forest.

But the sloth faces many ongoing threats. Due to deforestation and development, sloths are losing critical habitat. They are forced out of the trees in search of new territory, often getting hit by cars when they cross roads. Sloths are also sold as pets on the black market to tourists.The poachers take baby sloths from their mothers and cut off their teeth and claws. These infants usually do not survive long.

To help three-toed sloths, you can help protect their habitat. Donate to organizations like the World Land Trust or WWF.

You can also support sloth rehabilitation centers like Sloth Sanctuary or APPC. 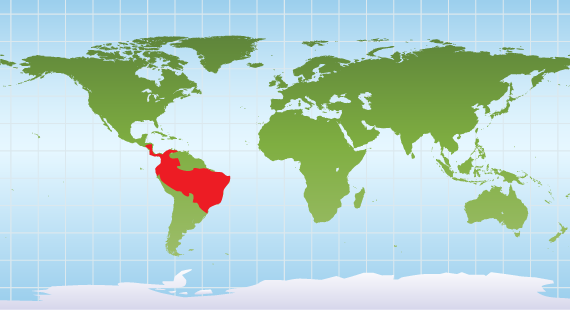 The brown-throated sloth inhabits the rainforest canopies of Central and South America.