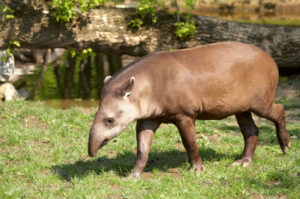 A relative of the rhinoceros, the Brazilian tapir, or lowland tapir, is one of four species of tapir.

Inhabiting the rain forests of South America, Brazilian tapirs live near water and are capable swimmers and divers. In fact, they sometimes run to the water to escape predators. Splayed toes, four on each front foot and three on each hind foot, help the tapir successfully navigate through soggy ground.

Weighing between 150-250 kg (330-550 lb.), Brazilian tapirs measure around 2 m (6 ft.) in length. Adult Brazilian tapirs have brown coats that vary in shade, with darker hair on their sturdy legs and short, stiff manes. They also have short tails.

A long, flexible proboscis, or snout, helps tapirs grasp leaves, shoots, buds, fruit, and small branches to eat. They generally feed only at night, hiding in the cool forest during the day.

For 2 days every 2-3 months, the female Brazilian tapir is able to conceive. Once pregnant, she will carry the baby for over a year before giving birth!

Baby tapirs have brown fur with white stripes to help them blend into the rain forest floor. The white stripes fade as the calves mature. 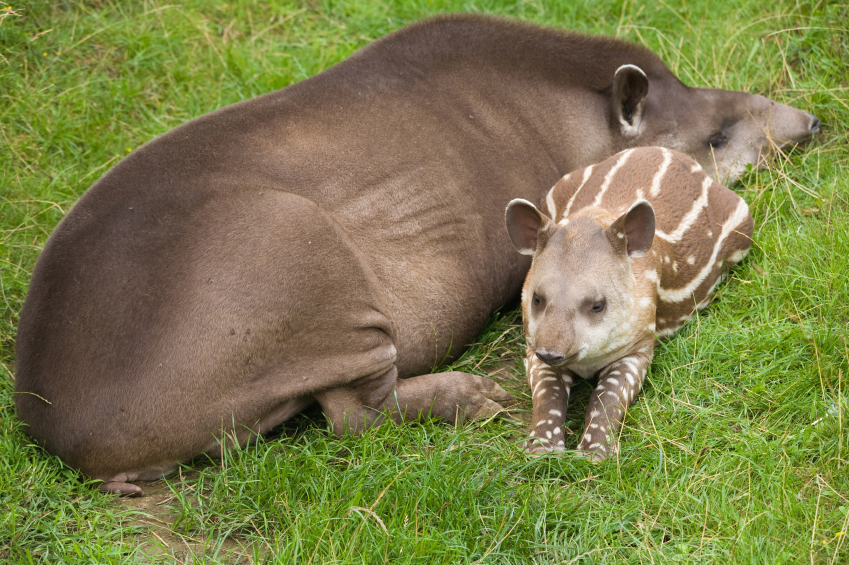 The baby will suckle for several months until the mother stops producing milk. At 18 months, the calf is fully grown but may stay with its mother for a little longer.

While healthy adult tapirs are fairly successful at avoiding predators, such as jaguars, pumas, and anacondas, young tapirs are more susceptible to attacks.

The Brazilian tapir is more abundant than the other three species of tapir, but it is still considered vulnerable of extinction by the IUCN Red List. One reason for the decrease in population is that Brazilian tapirs are hunted for their meat and hide. Furthermore, their habitat is being destroyed by deforestation and agricultural development.

You can help preserve their habitat by donating to the Tapir Specialist Group or the Tapir Preservation Fund. 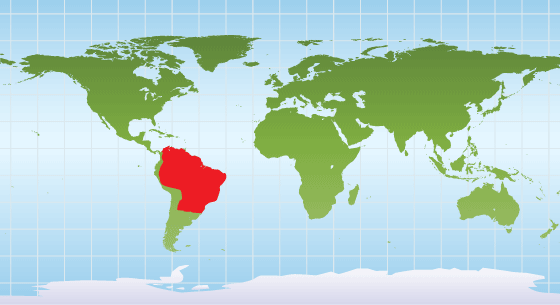 Inhabiting the rain forests of South America, Brazilian tapirs live near water and are capable swimmers and divers.