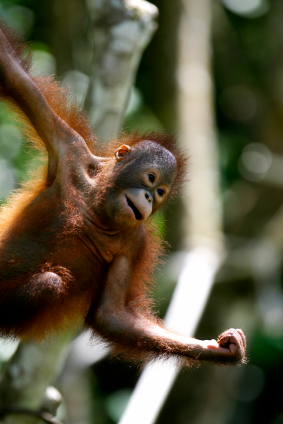 Boasting a Malay name meaning “People of the Forest,” orangutans share 97% of the same DNA as humans. Not surprisingly, they possess great intelligence as well as other human-like qualities.

For example, Bornean orangutans use tools in daily activities. They employ branches to test water depth or poke termite holes, and they utilize leaves as umbrellas, sponges, or napkins. Furthermore, research from the National Zoo in Washington, DC has demonstrated their great capacity to reason, solve problems, and even use computers. And similar to humans, baby orangutans cry, whimper, and smile at their mothers.

Living atop the rainforest canopies on the island of Borneo in Southeast Asia, the Bornean Orangutan is physically well-adapted to its environment. Strong hands and hand-like feet, along with flexible hips and long arms allow the orangutan to live primarily in treetops.

Swinging from tree to tree, orangutans feed on fruit, leaves, bark, flowers, and insects. They travel considerable distances to eat their favorite fruits (usually unripe), knowing which ones are in season and where to find them. They drink water captured in leaves when available, and in drier times, they soak up moisture from tree hollows using chewed leaf “sponges.”

Each night, they build nests in the treetops with leaves and branches. In this way, they have little need to venture to the ground, where their hand-like feet and elongated arms make walking very awkward. 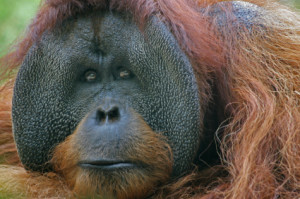 Male Bornean orangutans are largely solitary, only socializing temporarily with females during the mating process. To initiate this process, males send out a “Long Call,” which can be heard up to 3 km (~2 mi.) away.

Females will only be receptive to mating if the male has developed cheekpads, or jipek, which usually occurs when the male reaches his 20s.

A mother orangutan will nurse her offspring for 6-7 years. Although orangutans reach maturity at 8 years old, females will stay with their mothers up until their teen years to learn essential parenting skills, observing their mothers care for their younger sibling. Only then are they capable of rearing their own young. As female orangutans only give birth every 8 years, their rate of reproduction is very slow. In this way, orangutan populations take years to restore when hit with natural disasters and human encroachment.

In prehistoric times, orangutans inhabited forests as far north as China. Now, due to deforestation and poaching, Bornean orangutans have been restricted to the island of Borneo with their population reduced to 50,000-60,000. They are currently classified on the International Union for Conservation of Nature (IUCN) Red List as critically endangered, with their population severely fragmented and decreasing.

Many of the issues surrounding orangutan depopulation stems from the impoverished state of Indonesia. Facing poverty and starvation, many Indonesians have turned to eating orangutan meat, illegal logging, capturing babies for pet trade, and using slash and burn techniques to turn portions of the rainforest into palm oil plantations. Slashing and burning has resulted not only in a reduction of fruit trees and habitat for orangutans, it has also exacerbated natural forest fires, causing widespread destruction.

Aside from donating to the many orangutan charities around the world, there are many other things you can do to help save the orangutan on day-to-day basis. For starters, avoid purchasing tropical or exotic plywood and hardwood, palm oil-based products, and rayon viscose clothing. In addition, reduce your consumption of paper, and seek out recycled “treeless” paper sources. 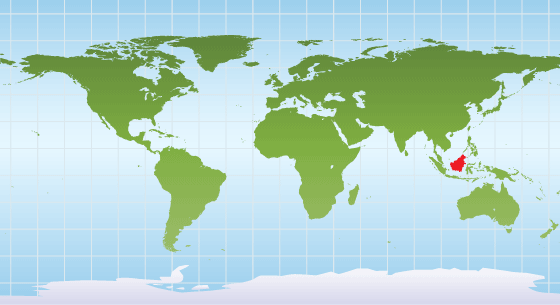 Bornean orangutans live on the Southeast Asian island of Borneo.

Blog Posts about the Bornean Orangutan