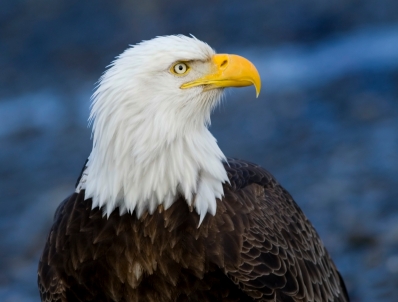 Clearly recognized by its white head, brown body, and hooked yellow beak, the bald eagle has been the national emblem of the United States of America since 1782.

Yet starting in the 1950s, this symbol of American patriotism began to dramatically decline in numbers due to the use of the chemical DDT. After rigorous conservation efforts by the United States government, the bald eagle successfully rejuvenated its population and can comfortably continue its role as the national bird of the US. 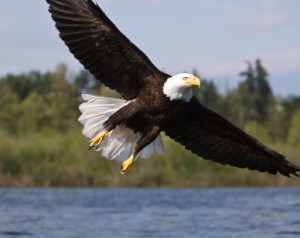 Living near a constant source of water, bald eagles feast on fish, ducks, snakes and turtles. They will also eat rabbits, muskrats, and dead animals. Utilizing their acute sense of sight and powerful talons, bald eagles attack their prey by swooping down on them at an angle.

They can reach speeds of up to 160 km/hr (100 mph) when diving. Once they capture their prey, they use their hooked beak to pull flesh out before eating it.

At around 4-5 years old, bald eagles will choose a mating partner through a courtship procedure. The courtship includes numerous calls and aerial displays. Once coupled, the two birds will mate for life. Only in the case where one eagle dies or disappears will the other one find a new mate.

Preferring to make their homes in large trees near bodies of water (both fresh and salt), bald eagles build enormous nests, called eyries, out of sticks. Generally, their eyries are at least half a meter (2 ft.) deep and 1.5 m (5 ft.) across but can be bigger. These substantial nests have been known to weigh up to 900 kg (1 ton). 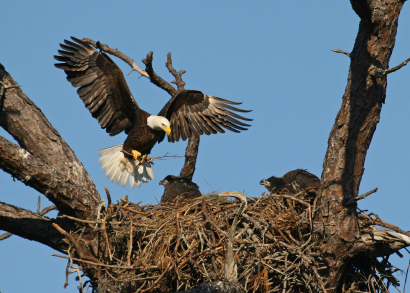 A mating pair produces up to three eggs a year, though it is not likely that all three will survive. Both parents take turns incubating the eggs. While one is incubating, the other searches for food or more nesting materials.

In 2007, the bald eagle was removed from endangered and threatened species list kept by the United States Fish and Wildlife Service. In addition, IUCN’s Red List currently considers the bald eagle as a species of least concern of extinction. Their successful recovery is due to years concerted conservation efforts along with the ban on the pesticide DDT in 1972.

While bald eagles have few natural enemies and are no longer considered endangered, threats still exist to the bald eagle, including habitat loss. As people move to the shores, they are cutting down trees and forcing eagles to make their homes elsewhere. Illegal hunting is another threat.

A good way to help bald eagles is to educate the public about the birds’ habitat requirements. Encourage shore property owners to limit the clearing of trees near the water, and advocate for less development in eagle habitat. You can also donate to the American Eagle Foundation. 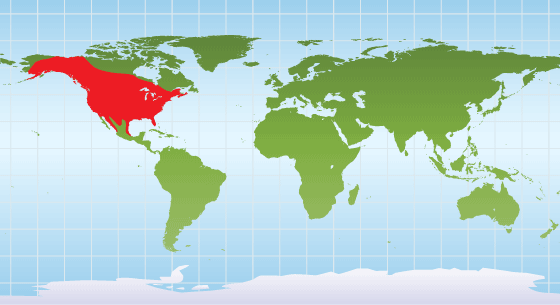 Bald eagles are found throughout most of North America, preferring to make their homes in large trees near bodies of water.

Blog Posts about the Bald Eagle