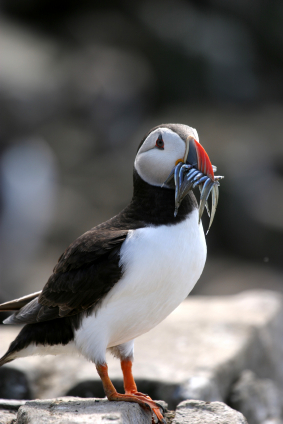 Dubbed “sea parrots” as well as “clowns of the sea,” Atlantic puffins sport large, brightly-colored beaks on their substantially-sized heads. Crisp black and white markings on their plumage, as well as superior diving capabilities, have led people to compare the northern seabirds to penguins. However, Atlantic puffins are actually not related to penguins at all. They are in fact small seabirds (about 25 cm, or 10 in., long) that belong to the Alcidae (auk) family.

Puffins are specially adapted to living on the open sea. Waterproof feathers allow them stay warm as they float at the ocean’s surface or swim underwater. Diving as deep as 60 m (200 ft.), they swim by flapping their wings as if flying through the water and use their feet to steer. There, they hunt herring, hake, capelin, and sand eels. They supplement their meals by drinking saltwater.

Atlantic puffins are also excellent fliers. Flapping their wings at up to 400 beats per minute, puffins can reach speeds of 88 km/h (55mph).

April to mid-August is breeding season for puffins. When a puffin is around 3-5 years old, it will choose a partner at sea to mate with for life. 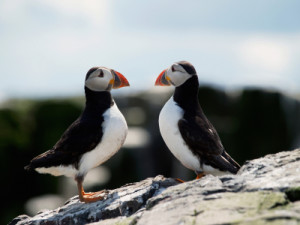 It is thought that the birds’ colorful bills and feet, which fade in the winter and brighten in the spring, help puffins assess potential mates.

Once on land, the pairs of puffins reunite within the colony. Some pairs exhibit a special behavior known as “billing” where the two birds rub their beaks together. This often draws an excited crowd of other puffins to watch.

Puffins create burrows, about 90 cm (3 ft.), in rocky cliffs either in the soil or between rocks. Often, couples will return to the same burrow year after year. At the back of the burrow, they build a nest lined with grasses, seaweed, and feathers. After the female lays a single egg, both parents take turn incubating the egg for about 40 days.

Once the chick hatches, the mother and father will take turns bringing it fish to eat several times a day. Atlantic puffins have the ability to carry several fish in their beaks at one time. They push the fish to the back of their mouth with their tongue, where ridges at the top of their bill secure the fish in place. This allows puffins to keep their mouth open to catch more fish without losing any in the process. In general, they can hold around 10 fish in their beak at once.

The chick stays in the burrow until it is able to fly. The young puffin uses a toilet area towards the front of the burrow away from the nest to stay clean. It cannot risk getting its feathers soiled and ruining the waterproof protection they provide. After 45 days, the chick leaves the burrow and spends 3-5 years at sea learning about feeding places and choosing a mate.

In the wild, puffins can live around 20 years. Their main predator is the great black-backed gull, which can capture a puffin mid-flight or swoop in on a puffin on the ground. Herring gulls are also a threat because they steal puffins’ fish (sometimes right from their mouths), and they pull puffin chicks or eggs from their nests.

With 6 million alive today, Atlantic puffins are not considered endangered by the IUCN Redlist. But some populations have been drastically reduced giving them a conservation status of vulnerable. Puffin colonies are threatened by overfishing, which causes a shortage of food for adults to feed their young. Oil spills also pose a danger. Oil not only destroys puffins’ waterproofing, it also makes them sick when they clean it off their feathers. Finally, global warming adversely affects puffins, who are adapted to living in waters about 0-20°C (32-68°F) and catching fish who are also adapted to those colder temperatures. Global warming also causes rising sea levels, which could flood out puffins’ breeding grounds.

If you would like to help puffins, you can help curb global warming by engaging in environmentally-responsible activities like using energy-efficient appliances and light bulbs, cutting down your carbon emissions, and recycling. You can also adopt a puffin from Audubon Society’s Project Puffin. 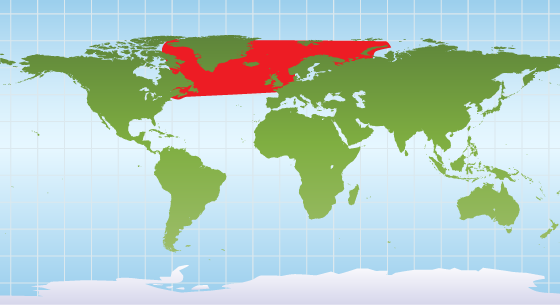 Blog Posts about the Atlantic Puffin