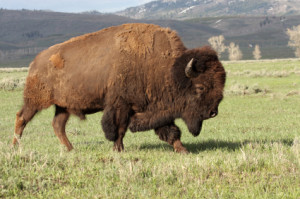 The American bison is a large hoofed mammal (or ungulate) that inhabits the plains of the United States and Canada.

Male bison are slightly larger than females. But both the male and female bison have a sizable head with small curved horns and a scraggly beard.

Bison are herbivores, feeding on the grasses of the prairie land all year round. They will generally rest during the day and graze in the mornings and evenings. Bison also need to find water every day.

Although bison have few natural predators because of their size, wolves, mountain lions and bears do attack the very young or very old bison. In some areas, people legally hunt bison or raise them for their meat and hides. There are, however, some protected herds that reside in national parks and reserves.

During the mating season (June to September), male bison will use their large heads to butt each other in attempts to gain the attention of females. In April or May of the following year, the female gives birth to a single calf. 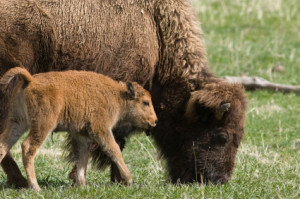 Newborn calves have a reddish, light brown coat and lack the distinctive hump of the adult bison. They begin turning brown and developing the hump after a few months.

Calves are nursed for up to 8 months and are fully independent by 1 year of age. Male bison do not participate in the upbringing of the calves.

The American bison was once the symbol of the Great Plains. Vast herds roamed from Canada to Mexico providing food, clothing, and tools to the native people. From a population that numbered in the millions, American bison dwindled to near extinction, driven there by American settlers.

Although an ongoing conservation program has resulted in modest increases in their population, the American bison is currently classified as near threatened by IUCN’s Red List.

You can help in their preservation by adopting a bison via the Defenders of Wildlife or donating toward the purchase of prairie land for reserves at the American Prairie Foundation. 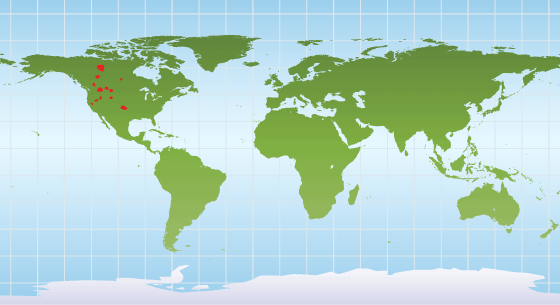 Herds of American bison roam patches of protected land throughout the plains of the United States and Canada.

Blog Posts about the American Bison