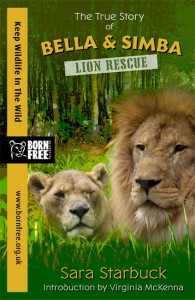 Millions of animals around the world are held in captivity in conditions that are not ideal. One such pair of animals have their story told in The True Story of Bella & Simba: Lion Rescue by Sara Starbuck.

The title lioness and lion live in two completely different worlds but are united in the fact that they both need to escape to better lives. Bella was blind, sickly, and brokenhearted at the loss of her family in the Romanian zoo in which she lived. Simba lived in a cramped backyard in France, after living his early years traveling in a circus trailer. The True Story of Bella & Simba: Lion Rescue recalls the tale of the rescue and rehabilitation of these two majestic animals with the help of the Born Free Foundation.

In the book, Starbuck weaves the stories of Bella and Simba in alternating chapters to keep the reader captivated. Each chapter focuses on a part of the lions’ rescue and is written in a friendly, easy-to-read way. The text is accompanied by vivid, full-color photographs of the animals and rescue volunteers.

Interspersed throughout the book are fascinating facts about lions — everything from how their claws grow to why they have a tassel on their tail. In this way, readers learn not only about the plight of Bella and Simba but about lions in general.

The True Story of Bella & Simba: Lion Rescue is a great read for anyone who loves animals, rescue stories, and happy endings. It is fit for young readers both in content and in ease of reading.

The True Story of Bella & Simba: Lion Rescue is published by Hachette Children’s Books. It is part of a series of non-fiction books featuring the rescue operations of the Born Free charity.