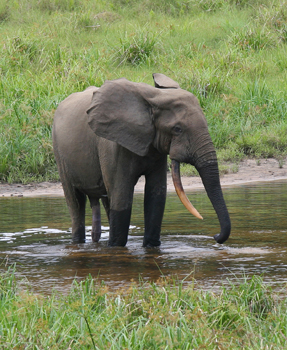 Photo of an African forest elephant by Peter H. Wrege

A new study has revealed that from 2002 – 2011, 62% of forest elephants had been wiped out in central Africa. Organized criminal gangs have been slaughtering whole herds of elephants to profit from a rapidly expanding illegal ivory trade.

Elephants, who are highly intelligent creatures, are aware of the danger they face and have tried to adapt.  They avoid roads and travel silently during the night. But these tactics are not enough when facing the onslaught of gangs wielding automatic assault weapons and grenades.

If nothing changes, African elephants are on a short path to extinction.

To learn more about the plight of African elephants, see:

If you would like to help elephants, you can write to your politicians to speak out against poaching. (Americans can write a letter to the Secretary of State on the Wildlife Conservation Society website.) For information on organizations that combat the illegal ivory trade, see National Geographic’s page, Blood Ivory: How to Help.