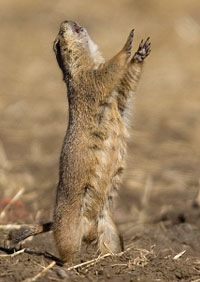 Prairie dogs are very social animals.  In order to survive the predators of the plains, prairie dogs have a system of calls to alert members of the colony of danger.  Professor Con Slobodchikoff of Northern Arizona University has spent the last 30 years delving deep into the nuances of prairie dog communication.  In his research, he performed a series of experiments recording the prairie dog sounds when certain predators entered the scene.

What he found was surprising.  Prairie dogs use different frequencies and pitches to not only distinguish a hawk, a coyote, a dog, or a human, they also describe the predator specifically. For example, prairie dogs distinguish a fat, short human from a skinny, tall human.  Interestingly, they do not discern male versus female humans, however.

You can hear the different prairie dog calls in an interactive graphic at NPR.org.