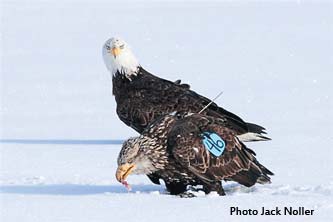 Stephen Colbert Jr., the most famous bald eagle in the world (named for the star of Comedy Central’s The Colbert Report), was caught on camera recently in Klamath Falls, Oregon by Jack Noller.

The eagle, now 2.5 years old, was the result of a breeding program at the San Francisco Zoo in California.  Tagged A-46, Stephen Jr. has been recorded flying up from California to Canada and back down south.

For more information about the sighting, see:
The Seattle Times – “Stephen Colbert’s eagle spotted in Oregon”
Herald and News – “Famous bald eagle lands in the Basin”