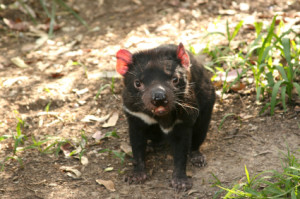 The late night screeching, stress-induced stink, and fierce look led early Australian settlers to name this marsupial the devil. Although once found all over Australia, Tasmanian devils now live only on the island state of Tasmania.

Inhabiting coastal scrub and forest areas, they make their dens anywhere they can safely sleep during the day, including hollow logs, old wombat burrows, and naturally-formed caves.

The Tasmanian devil is only the size of a small dog. It has black fur that helps it stay camouflaged when searching for food at night. It is also characterized by its sharp teeth, which aid in eating.

A nocturnal scavenger and sometime hunter, the Tasmanian devil a can travel long distances while looking for food. 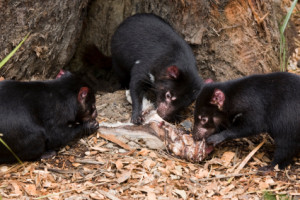 It will eat whatever is available, usually carrion (dead animals), sometimes eating spoiled or rotting meat. It will also eat fur and bones, which it crushes in its powerful jaws. Although they are solitary animals, Tasmanian devils will gather together to feed, often growling viciously at each other trying to scare off their competition. When they finish eating, there is nothing left of the carcass.

Tasmanian devils’ breeding season lasts from March to May. Female devils will mate with dominant males, who fight to gain their attention. Three weeks after conception, the females give birth to up to 50 babies, called joeys. These 50 extremely tiny joeys scramble to attach themselves to one of the four available teats in the mother’s pouch. Those that do not make it will not survive.

The remaining joeys will attach to the nipple in the pouch for roughly 3 months while they become fully developed. Like the wombat, the Tasmanian devil has a pouch that opens on the bottom to keep dirt out while traveling.

After the joeys leave their mother’s pouch, they remain hidden in the den for another 3 months. During this time the mother brings food to the young, and eventually the young devils begin venturing out on their own before finally leaving the den for good. They can live for up to 5 years in the wild.

The Tasmanian devil is protected on the island of Tasmania. Efforts have been made to sustain their population there. Being hit by cars is a major case of death for the devils, as they often feed on roadkill. The Tasmanian devils are also susceptible to Devil Facial Tumour Disease, which has dramatically decreased the population in the past 10 years. As such, they have been listed as endangered by the IUCN Red List.

To help you can volunteer with the Devil Facial Tumour Disease Team or donate to the University of Tasmania Foundation. 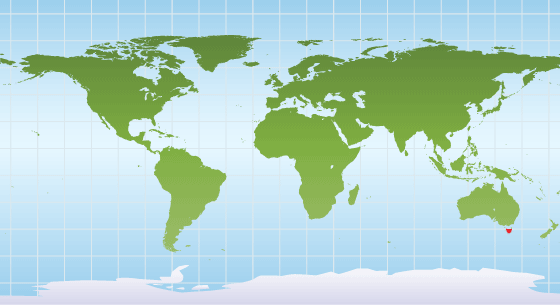 Now found only on the island state of Tasmania, Tasmanian devils were once found all over Australia.

Blog Posts about the Tasmanian Devil