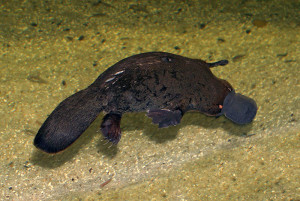 An animal with a bill like a duck, a tail like a beaver, and feet like an otter sounds like something a mad scientist would create. Add to the list the ability to lay lizard-like eggs and shoot poison out of your foot, and you have a unique creature indeed.

You have the platypus, a monotreme (an egg-laying mammal) that is indigenous to freshwater rivers and lakes in eastern Australia and Tasmania.

Roughly the size of a house cat, the platypus is between 30-60 cm (12-24 in.) in length and weighs 1-2 kg (2-4 lb.). It is covered in thick, dark brown hair over most its body. The thick hair is waterproof and helps keep the platypus warm and dry when in the water, where it spends most of its time.

Webbed paws and short legs that protrude from the sides of the body allow it to swim and dive with ease. Naturally buoyant, platypuses must keep swimming in order to stay underwater. Although you would think their wide tails are used to propel them while swimming like a beaver, they are actually used to store fat. 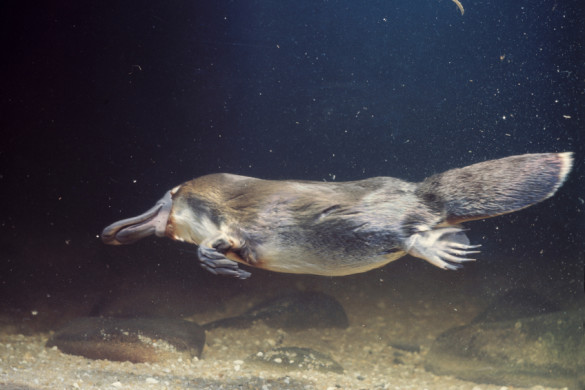 While submerged underwater, the platypus closes its eyes and ears. In order to hunt, it relies on its bill to sense other animals. The bill, which is actually a soft, leathery snout, has electro-receptors that pick up on the small electrical signals sent by animals when they move. These help the platypus find worms and freshwater shrimp to feed on.

The platypus will then store the food in its cheeks and wait to resurface before eating. Although they have no teeth, platypuses have grinding pads in their mouths to crush and grind their food.

The male platypus also possesses two small spurs, one on each hind paw. The spurs release enough toxic venom to kill a small animal or be incredibly painful for a human. While this weapon is used against predators if threatened (the platypus would actually rather run than fight), it is primarily used against other male platypuses during mating season. They fight to show dominance and scare away potential mating rivals.

The platypus mating season is between June and October. Around 2 years of age, both male and female platypuses are ready to mate.

After successfully mating, two or three eggs develop in the female. After about a month, the female lays the eggs, which are soft like lizard eggs. She will incubate the eggs by curling around them for 10 days before they hatch. The male will have nothing to do with the eggs or newborns.

Newborn platypuses are helpless. They are blind and hairless. They feed on their mother’s milk, which is expelled through pores on her body. The babies suckle on milk for 3-4 months.

Platypuses have a lifespan of over 10 years in the wild, but they do face a few threats. They have several natural predators, such as snakes, foxes, and birds of prey. Platypuses are also susceptible to habitat destruction, but that is at a minimum. They are protected from being hunted. As such, their populations are stable, and they are listed as a species of least concern by the IUCN Red List. 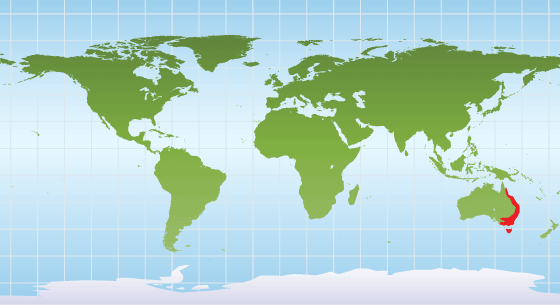 Platypuses are indigenous to freshwater rivers and lakes in eastern Australia and Tasmania.

Blog Posts about the Platypus